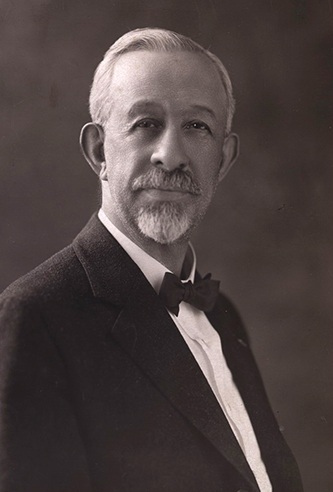 Solomon Lipinsky was a civic leader and prominent Jewish businessman in Buncombe County. He was known for his community leadership and involvement and as the owner of one of the largest department stores in all of North Carolina. He is credited with being one of the men that shaped the economic boom in Asheville during the 1900s.

Solomon Lipinsky was born in Richmond, Virginia, on February 23, 1856. At the age of 21, he moved to Tarboro, North Carolina where he met and married Eva Whitlock. After four years in Tarboro, Lipinsky moved to Asheville where he began working as a clerk at local store owned by his brother-in-law, Solomon Whitlock. By the time he was 31, Lipinsky owned a store, Lipinsky and Ellick, with his half-sister, Eva Ellick. It was a small store designed to provide dry goods to the citizens of Asheville. The year 1911 marked an economic boom for Asheville. During this time, Lipinsky and Ellick grew into the store Bon Marché and moved to a new location on Patton Avenue where it remained for 11 years. The store continued to grow and eventually moved to Haywood Street in downtown Asheville. During his lifetime, Lipinsky also opened other Bon Marché locations in Charlotte; Wilmington; and Columbia, South Carolina.

What started out as a small dry goods store became one of North Carolina’s finest and largest department stores. It did not take long for Bon Marché to become an attraction to Asheville citizens, especially since it had four floors equipped with everything from clothing to rugs and supplies. The store was tastefully decorated with mahogany cases and was one of the first public places in North Carolina to use hydraulic elevators. Bon Marché was an Asheville landmark for 90 years.

Bon Marché also sponsored daily radio broadcasts and held events such as visits from famous designers and make-up artists. These events encouraged community involvement in the department store. Lipinsky also offered training to his employees and started a small training school to make sure that his employees would succeed. Bon Marche was a family enterprise, and most of the Bon Marché locations were managed by his sons.

In addition to being involved in the economic development of the city of Asheville, Lipinsky was also involved in the community as a civic leader. He was a member of the Knights of Pythias, the Masons, and Odd Fellows, performing humanitarian projects through these organizations. He showed hosted an awards ceremony on behalf of Bon Marché to thank those that gave back to the community. Lipinsky served as Director of the National Bank of Commerce, president of the local Institutional Service Committee, and became an important presence in the Jewish community as a founding member of the Congregation Beth HaTephila. 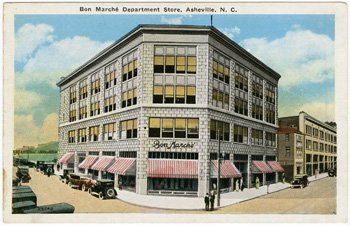 Lipinsky and his wife had three sons, Morris, Louis, and Whitlock, and a daughter, Clara. Bon Marché stayed in the Lipinsky family for three generations. Lipinsky died in 1925 and his wife followed in 1926. Newspapers announcing his death expressed the important role Lipinsky played in the community as a “beloved citizen”, and “one of the city’s best business men”. His children followed in his footsteps by becoming prominent leaders in their community. His son Louis made a tremendous impact in the education system and Lipinsky Hall at the University of North Carolina at Asheville is named after him.

Lipinsky was a man of principle, determined to leave a positive impact on the community and its citizens. He was involved in many aspects of Asheville's community and was dedicated to each organization and position he held. His obituary read: “Asheville has had few citizens who have been held in greater affection than Mr. Lipinsky. His kindness and courtesy, his unfailing consideration for others, made him one of the most beloved of Asheville citizens.”