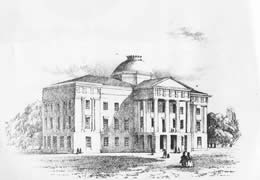 The last signal message of the Civil War in North Carolina was sent by Lt. George C. Round of the U.S. Signal Corps from atop the State Capitol in Raleigh. Round was among the first Federal occupation troops to arrive in Raleigh on 13 Apr. 1865. As a Union signal officer, he established his station on the top of the capitol. Having received word of Gen. Joseph E. Johnston's surrender to Maj. Gen. William T. Sherman at the Bennett House near Durham on 26 April, Round obtained permission to proclaim the news using signal rockets. He spelled out the word "peace" and lit a rocket indicating the end of the word. When it failed to fire, Round went back to relight it. As he leaned over the rocket, it exploded in his face, singeing off his eyebrows and eyelashes. But after an extended pause, Round resumed his message, which read: "Peace on earth, goodwill to men."

"The Old State Capitol at Raleigh." Image courtesy of the  North Carolina War Between the States Sesquicentennial Commission. Available from http://www.ncwbts150.com/ (accessed October 16, 2012).