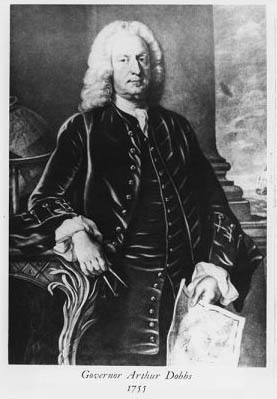 The King's Bounty (1757) was a grant of £200,000 that England gave its American colonies in repayment for their military assistance during the French and Indian War (1754-63). The portion of this money intended for North Carolina-less than £8,000-became a source of dispute between the colonial Assembly and Governor Arthur Dobbs (1754-65). Both claimed the right to distribute the funds, the Assembly through its acknowledged control of regular colonial funds and the governor by royal prerogative, or executive privilege, because he considered the money a grant rather than traditional income. The two branches of government also divided sharply over their intended use of the funds. The Assembly wished to spend them on church lands and free schools, whereas Dobbs, according to his instructions, sought to prosecute the war, establish a permanent seat of government, and finance governmental buildings.

The issue, however, went further than the distribution of funds. In 1754 London began strengthening the Crown's prerogative by limiting the powers of the Assembly. When he became governor, for instance, Dobbs was instructed to use his royal prerogative for the creation of towns and charters, the naming of representatives to the Assembly, and the designation of court meetings. In addition, he was to establish a seat of government, to reform the mode of paying quitrents and the process of making land grants, and to establish an exchequer court, which would be the final authority in all matters involving governmental funding. Until recently, most of these functions had been handled by the Assembly in conjunction with the governor.

It was the proposed grant of King's Bounty that broke the uneasy truce. The House of Commons, or Lower House, refused to recognize Dobbs's prerogative to choose a capital unless the governor surrendered the funds in question to the House's administration. He refused, on the grounds of prerogative, because his instructions admonished him to personally grant and dispense all public moneys contingent only on the consent of the North Carolina Council, or Upper House. The impasse was fueled by the Board of Trade in London. Although the board knew Dobbs's orders and sympathized with him, they ruled against him, ostensibly because moneys were traditionally controlled by the Lower House; but, more practically, because they wished to avoid colonial controversy. This ruling expanded the conflict between governor and Assembly to other issues, including courts, paper money, and the militia. The conflict did not end until Dobbs was removed and his successor, William Tryon, essentially accepted that the House of Commons would control all funds of whatever origin.

Though neither Dobbs nor Tryon surrendered the King's Bounty, utilizing it as an executive fund, the money proved to be a hollow victory. The prerogatives of the House of Commons were greatly strengthened as those of the Crown correspondingly declined.