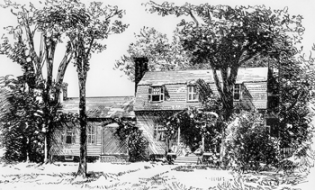 The Joel Lane House in Raleigh, named "Wakefield" by owner Joel Lane in honor of colonial governor William Tryon's wife, Margaret Wake, was built in the 1760s. Lane did major remodeling in the 1790s, including the addition of a front porch and alteration of the roof shape from gable to gambrel. The house is significant as the site of the first session of the Wake County Court, which convened there in 1771. Ten years later, the North Carolina General Assembly also met at Lane's Wakefield. As part of Lane's large plantation holdings known as Bloomsbury, the house originally faced east overlooking the 1,000 acres that were purchased from Lane in 1792 as the planned site of North Carolina's permanent capital, Raleigh. The house, located on West Hargett Street, has been restored to its 1790s appearance and is maintained as a historic house museum.