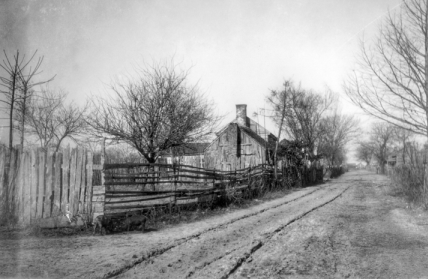 James City in Craven County evolved during the Civil War and Reconstruction years and represents attempts by African Americans to establish an independent community in North Carolina. In 1862 Union forces captured New Bern and other towns along the North Carolina coast. While Union troops occupied New Bern, former slaves-who had no place else to go-flooded into the town, which represented the largest refuge in North Carolina for black men and women. Some former slaves joined the U.S. Army, but many others hoped to establish homes and farms of their own in the area. Army officials established a settlement for the refugees along the Trent River, which lay just outside of New Bern. To accommodate so many former slaves, army officials chose to construct the settlement on confiscated lands formerly belonging to Peter G. Evans, a Confederate colonel. The settlement, known at first as the Trent River Settlement, contained 800 houses. By 1865 nearly 3,000 blacks lived in the camp, which was renamed James City in honor of its founder, Horace James, superintendent of Negro affairs and agent for the Bureau of Freedmen, Refugees, and Abandoned Lands.

During Reconstruction the settlement gained township status and began to resemble a city. Teachers from the American Missionary Association and the New England Freedmen's Aid Society established schools in James City; the Freedmen's Bureau established a hospital; and residents built churches, farmed land, and embarked upon business ventures. Many residents deposited their savings in a local branch of the Freedman's Savings and Trust Company. In 1865 James City residents selected delegates such as Joseph Green to represent them at state conventions and appeal for universal male suffrage and homestead rights. Soon after the war ended, James City had transformed itself from a squatter's camp dependent upon military aid to a thriving and independent community. Many black men and women, in fact, preferred to live in James City rather than work for plantation owners in the countryside.

Conditions worsened, however, in the late 1860s. Heavy rains one year and drought the next created poor harvests. The Freedmen's Bureau dramatically reduced aid to the needy, and sanitary conditions declined. In 1867 the federal government restored the land that comprised James City to the family of its former owner. Residents were forced to leave the camp, pay rent to the white owners, or work as sharecroppers. Freedmen and -women who once owned their entire crop before land restoration suddenly had to make do with only one-third of the proceeds from harvests. As a result of their new circumstances, residents of James City faced encroaching poverty.

By the 1880s the population had dwindled to 1,100, and women outnumbered men three to two. Most residents farmed, fished, or worked as laborers and domestics. Though the city's population had decreased, James City's men and women formed a tenacious community that protected itself from white supremacy and the whims of employers and landlords. Religious denominations such as the African Methodist Episcopal Zion Church provided for social and religious needs, and in 1881 James City laborers went on strike to protest low wages and unfair prices. That same year, residents amassed $2,000 and offered to buy James City from its new owners, Mary and James A. Bryan, who refused to sell.

In the 1880s and 1890s, the Bryan family embarked upon a bitter campaign to collect rents and evict tenants from James City. Many families argued that they had never paid rent, and others demanded compensation for improvements they had made, such as homes they had built and land that had been made suitable for farming. James Bryan refused to negotiate, and in 1892 the matter landed before the North Carolina Supreme Court, which decided in favor of Bryan and his wife. Some tenants bought tracts of land in nearby Graysville, Meadowsville, Brownsville, or Leesville, where they established a single community and named it the "new" James City. Bryan continued to rent the land in old James City to lumber companies and black women and men who refused to move. When World War II created jobs in industrial areas, many residents left James City, which, at the opening of the twenty-first century, had about 700 residents who owned or rented property there and possessed a strong sense of heritage. Organizations such as Jones Chapel AME Zion Church and the James City Historical Society seek to preserve the community's vibrant history and tradition.

Is there a report of current

Is there a report of current status of James City NCthat is worth publishing as an addendum to this article? Consider Trista Talton Underserved, underwater: Mapping a Future. Our Coast Winter 2022, published by NCcoast.org.

Great article on James City, NC my place of birth ! Thanks for sharing

I was led here after reading

I was led here after reading an article in The Atlanta Constitution (April 22, 1893) about the aftermath of the court case and the sheriff's inability to eject the inhabitants (it was on the same page as another article relevant to my genealogy research). Sounds like movie material to me -- generations of black families escaping the horrors of slavery, making a new life, only to have it ripped out from underneath them.

Yes Richard, I too ran

Yes Richard, I too ran across this article doing research on my family roots in North and South Carolina. I do agree that this sounds like movie material. What do you say we work on a movie script together? feel free to contact me.

Did you guys ever get the

Did you guys ever get the project going? My best friend is a film maker. She lives in Wilmington.