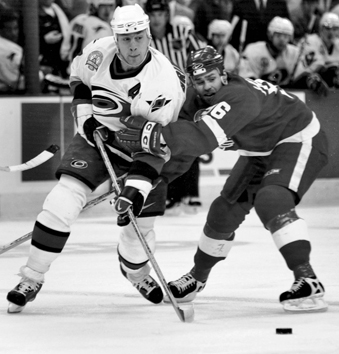 Ice hockey, popular in northern states for decades, took many years to take hold in the sports landscape of North Carolina. Hockey first skated into the state in 1957 with the expansion of the Eastern Hockey League to Greensboro and Charlotte. Carson Bain and Stanley Frank paid $2,500 for their expansion team, the Greensboro Generals, which had previously been based in Troy, Ohio. About a dozen local citizens owned 75 percent of the original Greensboro club. Hockey started in Charlotte when the Baltimore Clippers came to town and became the Checkers. The team continued there until 1977, when the Eastern Hockey League folded.

For 11 years after that, hockey seemed to have died in North Carolina. In 1988, however, the newly formed East Coast Hockey League (ECHL), headquartered in Charlotte, established a team in Winston-Salem known as the Carolina Thunderbirds. The ECHL consisted of 21 teams when it first opened, spanning the East Coast from Pennsylvania to Florida. North Carolina's ECHL team in 2005 was the latest incarnation of the Charlotte Checkers, who won the league championship Jack Riley Cup in 1996 and have consistently been a national leader in minor league hockey attendance.

The Raleigh Ice Caps were a successful ECHL franchise from 1991 to 1998. The relocating of the National Hockey League's Hartford Whalers to Raleigh in 1997-where the franchise became the Carolina Hurricanes-resulted in the end of the Ice Caps and the birth of hockey at its highest level in the state. For the first two years, the Hurricanes played in Greensboro while a new arena in Raleigh was being built. After a few difficult years with modest achievements on the ice and low attendance, the team began to find success. The Hurricanes reached the Stanley Cup finals in 2002, ultimately losing to the Detroit Red Wings. Four years later they returned to the finals, this time defeating the Edmonton Oilers in seven games to become the 2006 Stanley Cup champions.