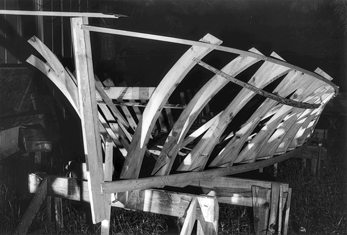 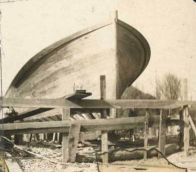 Harkers Island boats, with their distinctive high, wide, flared bows, are the most easily recognizable traditional watercraft in coastal North Carolina. A shipyard existed on Harkers Island as early as 1752. In the late nineteenth century many flat-bottomed sharpies were produced in the Core Sound area. After conversion to engine power between 1912 and 1920, the sharpies snaked and vibrated, and the machinery obstructed the cockpit. Compensating for these problems, local boatbuilders combined sharpie attributes with power, and the Harkers Island design was born. This unique boat type was well adapted to the local maritime environment of the Carolina sounds, with an engine allowing much higher speeds in open waters and a flared bow, known as the "Harkers Island flare" or "Carolina flare," that threw water away from the hull at high speeds in the choppy local waters. Credit for the first flared bow went to Brady Lewis, who worked with his father on Bogue Sound overhauling and repairing sailing vessels. After moving to Harkers Island in 1926, they began building boats in their yard.

Rubin, Small Craft Advisory: A Book About the Building of a Boat.