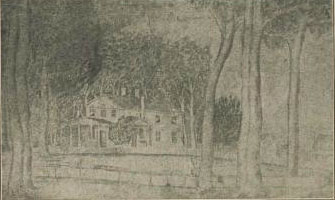 Grove, built in the late eighteenth century, was the home of Willie Jones (1741-1801), a leading North Carolina planter and Anti-Federalist politician. Situated in a grove of native white oaks near the town of Halifax, it is believed to have been the first tripartite, or T-plan, house in North Carolina. This plan, which features a two-story, pedimental central block flanked by one-story wings, was a popular house type among Roanoke River planters. Of particular interest was a large bay window placed so that Jones could view his flower garden and beyond it a private racetrack and his prized horses. The house remained standing, but in dilapidated condition, until early in the twentieth century, when it collapsed completely. In 1969 the Daughters of the American Revolution deeded the 3-acre tract of land containing the ruins of the Willie Jones house and the grave of his young daughter to the state of North Carolina, which subsequently sold it to the Historic Halifax Restoration Association, Inc. None of the beloved trees for which the house was named, and that Jones's will stated "are to be held sacred from the ax," remain.

Down line from John Paul

Down line from John Paul Jones