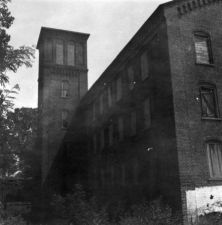 Great Falls Mills, chartered by the North Carolina General Assembly on 10 Apr. 1869, was located in Rockingham (Richmond County) at the falls of Falling Creek and along railroads lines from Wilmington, Charlotte, and Rutherfordton. The company acquired its property in November 1868 from the Richmond Manufacturing Company, whose textile mill had been burned by Union general William T. Sherman's troops in March 1865 near the end of the Civil War. The superintendents' and workers' houses, storehouses, and a church survived. Walter Francis Leak, John Wall Leak, and Robert Leak Steele rebuilt the textile mill, acquired by Claude Gore in 1901. The mill engaged in the whole manufacturing process, from carding and spinning to dyeing and weaving. When it closed in 1930, the facility included a five-story building, a dye house, 6 warehouses, 2 office buildings, 42 spinning frames, and 205 looms. The mill burned in 1972, but much of the ruins remained.

I have a photo of my great

I have a photo of my great great grandfather, George Solomon. He is accompanied by workers and children. I am curious if this photo from then was taken in front of the same mill.