Girl Scouts of the U.S.A 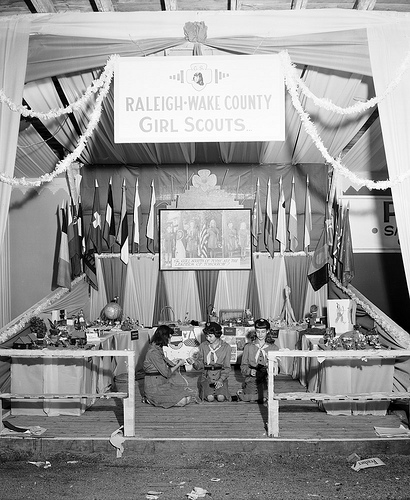 Girl Scouts of the U.S.A. (GSUSA) was founded in 1912 in Savannah, Ga., by Juliette Gordon Low, who wanted to provide experiences for girls beyond the usual household confines of the times by arranging opportunities for them to serve their communities and participate in camping trips and other outdoor activities. It appears that the first Girl Scout troop in North Carolina was organized two years later, according to notes in a history of the Girl Scout Council of Coastal Carolina. It is not clear where it existed. Another very early troop was in Southern Pines in 1918; its main purpose, and that of others organized during this period, was to help with the World War I effort by rolling bandages and knitting. The movement spread quickly during the Great Depression of the 1930s since there was little money in the average home for recreation; communities throughout the state recognized that young girls were in need of some interest or activity.

By the early 2000s, more than 50,000 girl scouts, served by thousands of volunteer group leaders, were registered in North Carolina. In each council, member troops are organized by age and grade: Daisy (kindergarten), Brownie (grades 1 to 3), Junior (grades 4 to 5/6), Cadette (grades 6/7 to 8/9), and Senior (grades 9/10 to 12). These levels are flexible to allow for differences among school districts and in girls' maturity, and "sister troop" activities facilitate and encourage advancement upward to the next level. Each level gives special recognition for girls' achievements, the highest recognition being the Girl Scout Gold Award, which can be earned at the Senior Girl Scout level. There are also Campus Girl Scout chapters registered at most North Carolina colleges and universities, where students can continue their involvement with community projects and with local Girl Scout troops.

Some of the troop and individual community service projects North Carolina Girl Scouts have initiated or participated in include making stuffed toys for hospitalized children, working on Habitat for Humanity homes, developing community greenways and parks, planning and constructing playgrounds at homeless shelters, implementing community literacy programs, and doing peer counseling and tutoring. The expanding scope of the Girl Scout program has kept pace with girls' increasing diversity of culture, interests, and needs while maintaining an emphasis on community service and outdoor enjoyment and appreciation. A wide variety of constructive and exciting explorations in the worlds of science, the arts, people, health, and the outdoors are included in the Girl Scout Handbook for each age level and in badge and patch activity books. Other publications on arts and crafts, ceremonies, songs and games, physical and emotional development, the sciences, and other areas of interest to today's girls are used; a regular revision cycle keeps these works relevant and appealing.

Volunteer leaders share ideas and lists of local resources at monthly or bimonthly meetings, which are held to plan events and to give leader support. The required Leader Basic Training courses are offered throughout the year, as are optional enrichment opportunities. Whether held at university centers or well-appointed Girl Scout campgrounds, these sessions are always well attended.