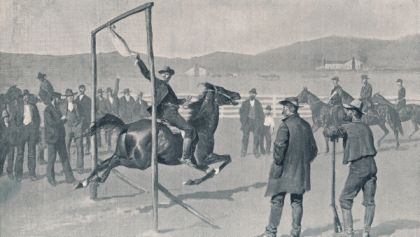 Viewed from the perspective of contemporary Virginians and South Carolinians, North Carolina in the late eighteenth and early nineteenth centuries seemed to exhibit a rough, "backwoods" character with no well-defined culture to smooth the rough edges. The sport of gander pulling, as well as similar rural pastimes such as horse racing, gambling, cockfighting, and "gouging" fist fights, reinforced this image. Gander pulling was particularly popular around Easter time. An old, tough gander (male goose) was hoisted up by his heels with his neck well greased. Each contestant, sufficiently fortified by ample amounts of homemade corn liquor, mounted his horse and galloped by the swinging goose. He reached for the neck and struggled to yank its head from its body. There were frequent failures in this contest. The combination of alcohol, flapping goose, and uneven horse gait easily threw contenders off their mounts.

The event offered a holiday outing for nearly everyone. Female spectators-who seem to have enjoyed gander pulling as much as men-cheered the crude "knights" on their sturdy mounts and encouraged them to "seize the day" (or gander). Each competitor hoped he would tear the prize from the body and nobly present a battered, bloody trophy to the lady of his choice. Although this entertainment seems cruel by modern standards, daily life itself in those days could be quite difficult and barbarous.

Around 1810 many North Carolinians experienced a strong religious revival movement as Evangelical Christians preached to their congregations the need for a disciplined life, free of frivolous entertainment and drunken amusement. Entertainment began to take on a more benevolent form. Corn shucking and barn raising were still acceptable, while gander pulling came to seem a little too brutal for society's new sensibilities. Voting day, however, remained a good excuse for public drunkenness.