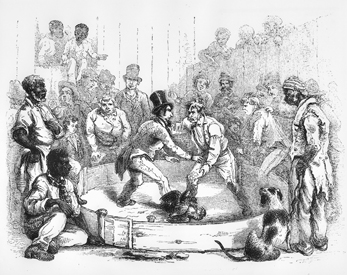 Cockfighting in North Carolina dates from the colonial period. A cockfight involves two specially bred gamecocks equipped with steel gaffs attached to each leg fighting until one is disabled. The loser frequently dies from his injuries. The nineteenth century was the heyday of cockfighting in the state. During this period, North Carolinians of high social standing bred and fought birds, frequently winning or losing large amounts of money in the process. By the 1850s written rules were distributed and a regular schedule of fights was held, making the bloody activity one of the state's first organized "sports."

The most successful breeder of gamecocks was Nash County planter Nick Arrington, whose birds, according to legend, were victorious over the birds of Mexican president Santa Ana in a series of contests fought aboard two steamboats in the Gulf of Mexico. One visitor to the Arrington plantation wrote that he "was greeted by such crowing of cocks as he had never heard in all his life before. . . . The air was resonant with their shrill notes, challenging and replying in fierce and eager tone." George Means of Concord developed a successful fighting breed known as the Red Cuban in the 1890s. James Norwood of Hillsborough, W. S. Church of Boonville, and Ike Rhodes of Wilmington were other successful breeders of fighting birds.

Even at the height of its popularity, cockfighting was controversial. Most North Carolina newspapers refused to take fight-related advertising by about 1820. Although outlawed in the twentieth century, it survived in isolated places on the periphery of legitimate sporting society for many years.