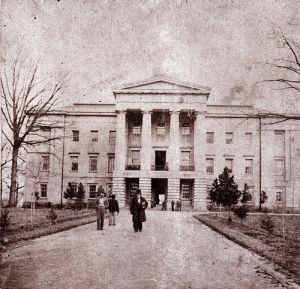 Free suffrage was a political concept heatedly discussed among North Carolinians in the mid-nineteenth century. The ownership of 50 acres of property or the payment of taxes had been a prerequisite for voting in certain instances since the colonial period. In the gubernatorial campaign of 1848, however, candidate David S. Reid accepted the proposal of leaders of his Democratic Party that this limitation on the franchise be removed, making free suffrage a key issue in his campaign against Whig candidate Charles Manly. Although Manly won a narrow victory, free suffrage had become important to many North Carolinians. In the 1850 governor's race, Reid won handily over Manly and the Democrats captured control of the state legislature. A free suffrage constitutional amendment continued to be debated in the General Assembly for several sessions until it finally became a reality in 1857, when it won in a popular referendum by a wide majority of 50,007 to 19,397. Estimates from the era indicate that 125,000 North Carolinians gained the right to vote with the state's adoption of free suffrage.