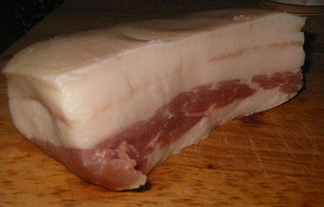 Fatback, the fatty meat from the back of a hog that is usually dry-cured with salt, has been a staple ingredient in North Carolina and southern cooking since colonial times. Through the years certain synonyms for fatback have arisen, among them salt pork, fat meat, fat pork, (dry) salt meat, salt bacon, seasoning meat, side meat, sowbelly, white bacon, and middling meat. Fatback is used in a dizzying variety of ways: besides being eaten as an entrée in simple meals, it is particularly popular as a seasoning for green beans, new potatoes, turnip and collard greens, fried corn, black-eyed peas, and other dishes. The meat also is believed by some North Carolinians to have value as a folk medicine, curing boils and sore throats and removing warts.