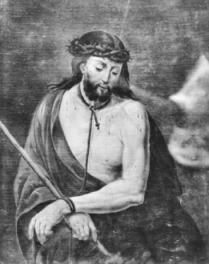 Ecce Homo (Behold the Man), a famous oil painting by Francisco Pacheco measuring about 30 by 40 inches in size and depicting Christ wearing a crown of thorns, hangs in St. James Episcopal Church in Wilmington. Three Spanish ships attacked and occupied the town of Brunswick in 1747, driving out the inhabitants. Three days later, men of the area gathered to drive out the Spanish. A carefully aimed or unusually lucky shot lobbed a shell onto the Spanish privateer Fortuna, still anchored in the Cape Fear River beside the town. The Fortuna exploded and the other two ships sailed down river, where they paused to exchange prisoners. Ecce Homo was among the goods removed from the sinking ship. The colonial assembly in May 1751 voted to present the painting to St. Philip's Church in Brunswick. When Brunswick was abandoned after the American Revolution, the painting was moved to St. James Church.