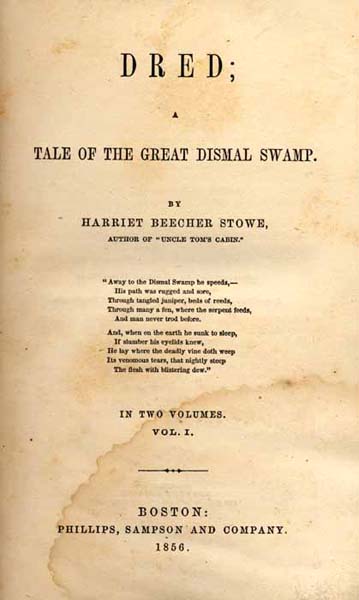 Dred, published in 1856, was Harriet Beecher Stowe's much-anticipated sequel to Uncle Tom's Cabin (1852) in which she sought to further fan the flames of antislavery sentiment. The book was a response to the violence in Kansas between free-state settlers and pro-slavery voters from Missouri and the caning of Massachusetts senator Charles Sumner by South Carolinian Preston Brook, an incident that greatly incensed northerners (including Stowe, an acquaintance of Sumner). The book is an anomaly in several respects: it was inspired by events then taking place in "Bleeding Kansas," yet the title character is heavily modeled on slave rebellion leaders Nat Turner and Denmark Vesey. Despite inspirations from Kansas, Virginia, and South Carolina, Stowe chose to set her tale in North Carolina, a state she had never visited.

Stowe subtitled the novel A Tale of the Great Dismal Swamp, a reference to the vast wasteland that straddled the easternmost border of Virginia and North Carolina. She knew of the area primarily from the descriptions of landscape architect Frederick Law Olmsted, who moved through the Great Dismal during his extensive southern tour of 1853. Olmsted wrote vividly of the slaveholding regimes he had observed in the region, both in his Journey in the Seaboard Slave States (also published in 1856) and in correspondence with Stowe.

As literature, Dred was considered much inferior to Uncle Tom's Cabin; some critics cited the sheer speed with which Stowe wrote it as an obvious reason for its structural and stylistic weaknesses. The novel is far darker and ultimately far more pessimistic than its predecessor in terms of Stowe's hopes of abolishing or reforming the "peculiar institution" of slavery. According to one assessment of the two books, "If Uncle Tom's Cabin stands as a war cry to a divided society, Dred is a prophecy of disintegration."

Although the appeal of Dred proved much more fleeting than that of Stowe's classic first novel, and few people remembered it or read it after the Civil War, President Abraham Lincoln probably had Dred as much as Uncle Tom's Cabin in mind when in 1863 he proclaimed Stowe as "the little lady who made this big war."

Title page of Dred, A Tale of the Great Dismal Swamp. Image from Documenting the American South at the University of North Carolina at Chapel Hill. https://docsouth.unc.edu/nc/stowe1/title.html (accessed August 20, 2012).