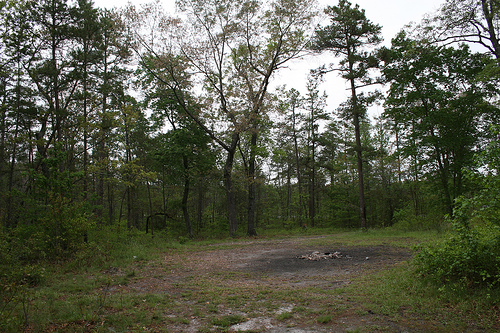 Devil's Tramping Ground, located ten miles from Siler City in western Chatham County, is a foot-wide bare path forming a perfect circle 40 feet in diameter. Regional legend maintains that Satan frequents this area on his nightly walks, pacing the circle as he contemplates his evil deeds. Normal vegetation surrounds the circle, but only a wiry grass grows inside it, and no plant life of any kind can be found on the path itself. Locals have been unsuccessful in trying to transplant the wiry grass to other soils. Visitors have attempted to anchor sticks and other obstacles in the barren area, but morning always finds these obstacles cleared away.

In addition to the devil-centered explanation, numerous other theories have arisen to account for this strange North Carolina landmark. Some people believe the spot was an ancient meeting place for local Native American tribes, who made the bare circle with their ceremonial dances. Another explanation links the area to the legend of the Lost Colony of Roanoke Island. This story holds that the Tramping Ground was an area called Croatan, named for a fallen tribal chief buried there after a battle, and the word "Croatoan" carved in the tree on Roanoke Island referred to this battle site. In both of these stories, the tribal gods purportedly preserved the barren circle as a memorial to their followers' loyalty.

Scientific explanations for the characteristics of the Devil's Tramping Ground have been offered as well. Some say horses used in the operations of an old molasses mill created the spot with their constant circular treading. However, comparisons to the paths formed at similar mills do not support this theory. Possibly the most plausible explanation came from soil studies once conducted by the North Carolina Department of Agriculture. Samples of earth taken from the bare path proved to be sterile due to an extremely high salt content. The remains of natural salt licks were also found in the area.

I went there once when I was

I went there once when I was fourteen. We moved a bunch of giant logs and the biggest rocks we could find in the circle, and when the sun came up, all the stuff was still there. Sad to see the legends are just legends after all.

I went ther wonce and I seent

I went ther wonce and I seent a gost. It was blue/wite and it spooked me real bad. I caint beleive that this is legal

Today my family and I with

Today my family and I with our dog visited the devil's tramping ground, it was eerily quiet, no bird's, squirrels, not even ants etc... On our way out our dog kept looking up and at tree whimpering with her ears back and tail not wagging. On our way back to our vehicles everything seemed fine, until it wasn't... I unlocked all four of my car door's with the remote, put our dog in the car and put the key in the ignition but didn't start it. I closed the door out of habit but when I went to open it again all four of the door's were locked with our dog inside. This was freaky since my door's don't lock by themselves and if you accidentally lock the door's the car won't let it happen, like you push the lock and the lock pops back up. I couldn't believe the car was locked, I had to call AAA so they could unlock my car, our dog is safe and sound but I'm fully expecting to experience strange thing's for a little bit after this "adventure".

Who owns it my team wants to

Who owns it my team wants to camp there all night

We would like to come and camp there .. is it open to public or do we have to make reservations. If not is it open to the public all hours of day and night. Thanks

A few friends and I camped

A few friends and I camped there a few years back maybe around 2009 we slept or I'd say more or less Layed there in the circle in a tent all night.. Nothing moved us but got real weird after that. My radar detector would go off making noises not even in the programming and completely out of the power source for months it started that night.. I still use that thing but after a few weeks of torment it has never done it again! Remember it went off many times unplugged! Something weird there but nothing messed with our tents thank god! Fun experience but I'll never go back

Thanks for visiting NCpedia and sharing your experience with us and NCpedia readers!!