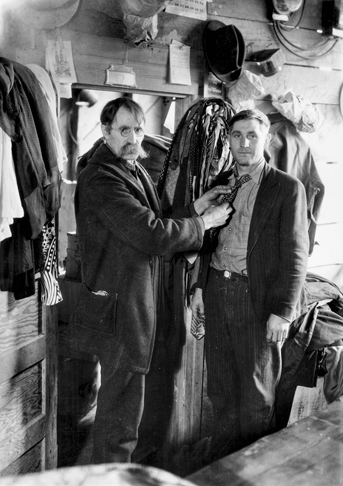 The Crossnore School, a nondenominational Christian home for children located in the town of Crossnore in the Linville Valley of Avery County, was founded by two doctors, Mary Martin Sloop, of Davidson, and her husband, Eustace Sloop. The Sloops came to the mountains as medical missionaries. While Eustace devoted much of his time to the medical needs of the local people, Mary undertook what became a lifelong effort to provide educational opportunities to the region's children, among the poorest in the state. She believed strongly that young women needed to break the cycles of poverty and ignorance perpetuated by a tradition of early marriage and motherhood.

Mary Sloop solicited contributions of used clothing, which she organized into an "ongoing yard sale." Proceeds from this, plus individual gifts and, beginning in the 1920s, financial assistance from the Daughters of the American Revolution (DAR), provided the needed funds to start and expand Crossnore School. What began as a one-room schoolhouse in dreadful condition eventually became a complex of 20 buildings on more than 72 acres, 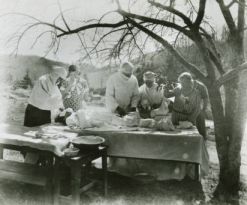 including boarding facilities opened in 1913 for orphans and other children who lived too far to commute to the school. Improvements to schools and roads, modern methods of farming, and a hospital and dental clinic were also part of the Sloop legacy. Crossnore School continues to be privately supported by the DAR, civic groups, foundations, and individuals. Self-support also comes from a working farm and from the Weaving Room, begun as part of vocational training in the high school in 1923 and continuing today. Crossnore School still follows the original purpose of its founding, "to give aid, comfort, and improvement to the lives of poor or troubled children."

Man being fitted with used clothes at the “ongoing yard sale” sponsored by Crossnore School as a way to raise money. Photograph by Bayard Wootten. North Carolina Collection, University of North Carolina at Chapel Hill Library.

Mary Martin and Eustace Sloop Operating Under an Apple Tree. Image courtesy of the Crossnore School via DigitalNC. Available from http://library.digitalnc.org/cdm/singleitem/collection/ncimages/id/3917 (accessed October 30, 2012).