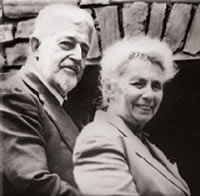 Mary T. Martin Sloop, physician, educator, and reformer, was born in Davidson, where her father, William Joseph Martin, was a professor of geology and chemistry at Davidson College. Her mother was Letitia Coddington Costin Martin. Mary Martin was graduated from Statesville Female College for Women in 1891 and continued her education as Davidson College's only coed. Determined to become a medical missionary in Africa, she fought to become the first female admitted to the North Carolina Medical College in Davidson. Because she was not allowed to study anatomy there, she transferred to the Woman's Medical College of Pennsylvania at Philadelphia and earned her degree in 1906. While serving a one-year internship in Boston, she learned that she would not be accepted for foreign service by the Presbyterian Mission Board because single white women were no longer being sent to Africa and because she was considered too old (at thirtythree) for mission work in China.

Martin became the resident physician for Agnes Scott College in Decatur, Ga. A year later, in July 1908, she married Dr. Eustace H. Sloop, a surgeon she had met over a decade earlier when he was an undergraduate at Davidson. He too was interested in mission work, and they decided that their ambitions for service of that type could be fulfilled in the mountains of North Carolina. After their wedding at her family's summer home at Blowing Rock and a horseback honeymoon through the Blue Ridge Mountains, the two doctors established a joint practice at Plumtree in Avery County. Three years later they moved to nearby Crossnore, a more accessible locale in the Linville Valley, where they spent the rest of their lives. Of their intentions, she later wrote: "We figured we were both pretty good doctors, we were both as tough as pine knots, and we could take a lot of licks. We could return them, too, in terms of healthy swings at disease and poor diet habits, poverty through lack of opportunity, illiteracy, superstition, and all the other ills" that held back "these fine mountain people."

Eustace Sloop devoted the bulk of his time to the medical needs of the mountain people, providing most with the first health care they had ever received. His efforts later led to the establishment of the Crossnore Hospital, which was for a long time the only medical facility serving a four-county area. Mary Sloop responded more to the dearth of educational opportunities in the region and undertook what became a forty-year crusade to offer adequate schooling for mountain children. She was particularly appalled at the number of child brides, who married and became mothers in their early teens, and worked vigorously to provide them with what she saw as the only preventative for such early marriages, a high school education. From contributions across the country she organized the collection and sale of great quantities of used clothing. The proceeds from that effort, along with financial assistance from the Daughters of the American Revolution, supplied the funds to establish and then to expand the Crossnore School. During the 1920s and 1930s a one-room schoolhouse in use for only four and a half months a year grew into a complex of twenty buildings and over 250 acres; it provided a nine-month, eleven-grade education by trained teachers, with special emphasis on home economics, vocational training, and Bible study. As a boarding school for orphans and other mountain children who lived too far from a good school, the Crossnore School came to be largely self-supportive through an adjoining working farm and through a weaving program for the students. Under Mary Sloop's guidance, the weaving sequence revived what had almost become a lost art among mountain craftsmen.

In addition to her efforts in getting a state law raising the compulsory age for school attendance to sixteen, Mrs. Sloop pressured the legislature and the governor to provide paved roads, modern agricultural assistance and training, and more effective law enforcement against moonshiners for Avery and adjoining counties. The Sloop's two children, Emma Sloop Fink and William L., became a doctor and a dentist, respectively, and returned to Crossnore to work with their father and to administer his hospital.

Dr. Mary Sloop achieved nationwide attention in 1951 when she was named America's Mother of the Year. In 1953 she published her popular autobiography, Miracle in the Hills , written in collaboration with Legette Blythe. She was ninety years old when she died in Crossnore, a year after her husband's death in February 1961.

The link to Crossnore school

Thank you for reading NCpedia and for alerting us that the wrong Crossnore School was linked in this article. It has been corrected.

Mothers of America The

Mothers of America The Lasting Influence of the Christian Home by Elisabeth Logan Davis introduced many families whose female member earned the distinct title of Mother of ....(year). There I met Mother of 3000 Children Mary Martin Sloop.

I am just now reading

I am just now reading Miracle in the Hills. Can you tell me the dates of birth of Mary's husband and children? And have any other books been published by or about Mary and her immediate family? Has her book ever been republished? I had never heard of these extraordinary people prior to coming across this book at a library discard sale.

here are a few books by and about her.

Also, I’m not aware of her book being republished.

when was the hospital founded

when was the hospital founded and is it still running? curious

Thanks for visiting NCpedia and asking a question. I found an article on the Avery Journal website about Sloop Hospital that answers your questions (https://www.averyjournal.com/avery/sloop-hospital-family-then-and-now/ar...).

Interested in information a bout Sloop Falls in Crossnore,
NC

I just read the book 'Miracle

I just read the book 'Miracle in the HIlls' by Mary Martin Sloop, and it was terrific! I recommend it highly. She is a remarkable woman!

Thanks for visiting NCpedia and for sharing this with other NCpedia viewers!