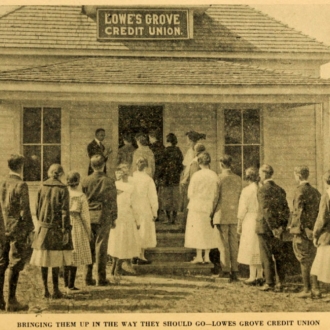 Practical cooperative credit was developed in Germany in the mid-1800s. In 1913 John Sprunt Hill, a wealthy Duplin County businessman and chairman of North Carolina's banking commission, was a member of an American delegation to Europe to study successful systems of cooperative finance, production, and marketing in seven countries. Hill was moved by a statue in Germany memorializing Raiffeisen and depicting the farmers' plight before the creation of credit unions and their prosperity through credit unions. Upon his return to North Carolina, Hill worked to gain farmers' support for the passage of the McRae Credit Union Bill, enacted in 1915. Because of this original rural focus, North Carolina was the only state to place its Credit Union Division under the Department of Agriculture, where it stayed until it was transferred in 1971 to the Department of Commerce.

Lowe's Grove Credit Union, organized in 1915 after the legislature passed the McRae bill, was the first rural credit union in North Carolina and perhaps the first in the nation. The credit union started with a membership of 24 local farmers and businessmen and a program of 6 percent loans, cooperative buying, and thrifty management. With greater prosperity, the community obtained a charter of incorporation in 1919 that allowed a local government to levy taxes and issue bonds for public services.