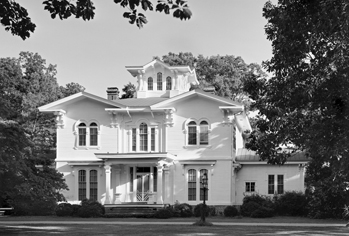 Coolmore is a striking antebellum mansion four miles west of Tarboro on U.S. 64. A lantern cupola atop its roof distinguishes this Italianate villa, built between 1859 and 1861 for planter-physician Joseph J. W. Powell. Outbuildings, including a dairy, smokehouse, slave quarters, gas house, and stable, feature cupolas as well. Architect Edmund G. Lind of Baltimore built Coolmore, and Russian émigré painter Ernst Dreyer decorated the interior plaster walls. Visitors marvel over these frescoes, the ornate plasterwork and marbling, and a hand-carved spiral stair leading to the cupola. Family and local lore maintains that the house was spared destruction by Union troops in April 1865 because one of the soldiers, an artisan from Maryland who had helped build it, saluted Coolmore. 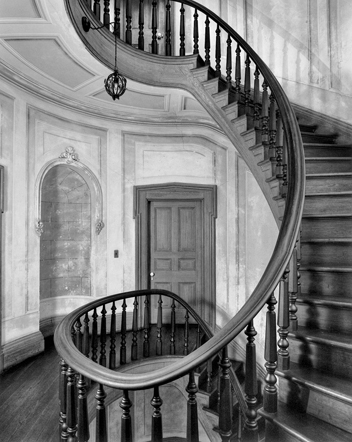 Stair in the rotunda of Coolmore. Photograph by Tim Buchman. Courtesy of Preservation North Carolina.