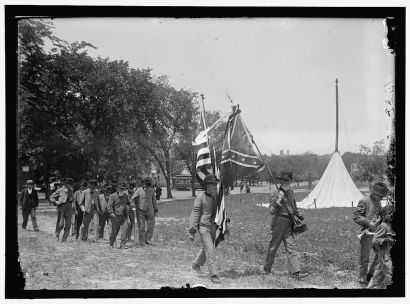 Although the Civil War injured or killed tens of thousands of North Carolinians, not until after Reconstruction did the state begin to pass broad pension laws to provide for crippled ex-Confederate soldiers and the widows of deceased veterans. In 1879 the legislature passed a law granting $60 per year to Civil War veterans who had lost both arms or both legs or were totally blind. Only a dozen individuals applied for this pension. An 1885 statute expanded the program by creating a $30,000-per-year fund to pay pensions to soldiers who were at least "three-fourths incapacitated by wounds" and to Confederate widows whose husbands had died during the war. As a result, from 1879 to 1900 approximately 4,500 North Carolinians applied for benefits under the new law.

Although there was an extensive verification process, approximately three-fourths of all veterans' applications were approved in the first year. The most common reason for rejection, which could be appealed, was that the disability was not severe enough to warrant a pension. In 1887 the legislature extended pensions to widows whose husbands had died from disease, not just from wounds. However, the North Carolina pension system was poorly funded; pensioners still received approximately $60 annually, in contrast with Tennessee's system, which provided $100 a year.

At the beginning of the twentieth century, state lawmakers decided that veterans were entitled to pensions simply for suffering the infirmities of old age. In 1901 fixed pensions ranged from $30 to $72 annually, based on the extent of incapacitation, with total pension expenditures not to exceed $200,000 for veterans and widows. This amount was increased during most succeeding legislative sessions, reaching $650,000 in 1919. In addition, in 1909 the lawmakers authorized counties to levy special taxes to benefit veterans residing within their borders. Moreover, veterans' petitions were now approved for reasons that earlier would have resulted in rejection, and applications were simplified.

The most important change after 1900 was that a widow could apply for a pension even if her husband had died after the war, as long as he had never deserted. Furthermore, in 1909 the legislature allowed applications from widows who had married Confederate veterans as late as 1 Jan. 1868-two and a half years after the war ended. In the ensuing years this date was gradually moved forward; by the 1920s widows received pensions even when they had married Confederate veterans in the 1880s. Another change granted pensions to women who had remarried since the death of their veteran husbands.

Before 1901 about twice as many widows as veterans applied for pensions, as few men believed that they could meet the strict eligibility requirements of the 1885 law. After 1901, with the aging of many former Confederate soldiers, the state received roughly equal numbers of applications from veterans and widows. A total of 35,000 pension applications were filed from 1901 to 1946.

What types of Confederate

What types of Confederate Pensions are there? I just ran across an ancestor's
Confederate Pension Application, and the source states that the application be
granted, and the applicant placed in Class 2, under the Act of April 24th, 1911.....
What exactly does this mean? Will appreciate the help! Thanks, Theron

I am wondering if the pension you are looking at is for Alabama?  North Carolina did not pass a law in 1911 for pensions, but I believe that Alabama did.

If so, here is a link to the online encyclopedia of Alabama, which may be helpful: http://www.encyclopediaofalabama.org/

Here is also a link to a page for Confederate Pension Records by state on the National Archives website -- https://www.archives.gov/research/military/civil-war/confederate/pension....  You’ll find useful links.

I am guessing, based on other states including North Carolina, that the class referred to the level of disability/dismemberment sustained by the soldier, which determined the level of benefits permitted.  You may have to dig into the records a bit to figure out the classification.  You may also wish to contact the Alabama Department of Archives and History – they will probably be able to answer the question very quickly. Here is a link to their website: http://www.archives.state.al.us/civilwar/index.cfm

I hope this helps!  Please let me know if I can help with anything else.

It is my understanding that

It is my understanding that survivor's benefits were still being paid to some Confederate descendants in NC as late as 2007.