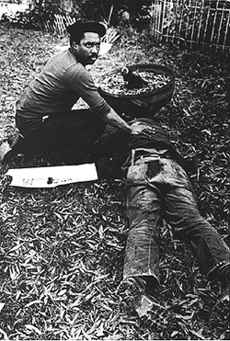 See also:"Death to the Klan" March.

The Communist Workers Party (CWP) was a small, Leninist-Maoist organization founded in October 1979 through a reorganization of the Workers Viewpoint Organization (WVO). As it advocated the wholesale overthrow of the U.S. government, the CWP was hardly in the mainstream of more traditional North Carolina activism. However, it did seek to rally a small African American constituency by marrying opposition to both racial and class oppression. WVO and CWP organizers, including veteran Greensboro Black Power activist Nelson Johnson, began their drive to educate working-class North Carolinians by union organizing in textile mills and among Duke University service employees.

The CWP is best known for its ill-fated "Death to the Klan" march in Greensboro in November 1979. In the hope of rallying more working-class African Americans, CWP organizers planned the march to begin at a public housing project to demonstrate against the North Carolina Ku Klux Klan (KKK). While protesters shouted "death to the Klan," the KKK and allied Nazi Party members brought death to their opponents, gunning down five demonstrators. The incident shook the city and the state, belying the image of a placid, progressive North Carolina that had solved the turbulent racial and political unrest of a bygone era.