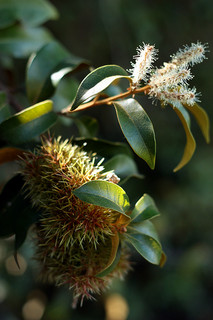 Chinquapin, or "chinkapin," is a diminutive cousin of the American chestnut. Although their name derives from eastern-dwelling Algonquian Indian language, chinquapin trees are known as far west as Texas, and several species exist. In North Carolina the principal chinquapin tree, Castanea pumila, occurs in the Piedmont and Mountain regions. Small and shrublike in nature and often with several trunks, a chinquapin seldom grows above 20 to 30 feet in height. The wood of chestnuts and chinquapins is extremely rot resistant and has been used in making railroad ties and posts and rails for fences. The occasional split-rail zigzag fences along the Blue Ridge Parkway are fashioned mostly from these trees.

Chinquapin husks contain a single kernel that, when ripe in the fall, is a tasty foodstuff for humans as well as animals. Kemp P. Battle, the president of the University of North Carolina from 1876 to 1891, remarked that there were two local delicacies that students dependably would raid: scuppernong grapes and chinquapins. In his day a convenient grove of chinquapins stood near the intersection of Columbia and Franklin Streets, main corners of modern-day Chapel Hill. In the early 1950s it was possible to buy a bag of chinquapins at roadside stands in hilly, rural North Carolina counties such as Stokes and Surry. The bag was approximately the same size as a bag of peanuts sold at a ball game and usually cost a nickel. At the end of the decade the price had increased to a quarter a bag, if one could find them for sale at all.

I grew up eating Chinquapins

I grew up eating Chinquapins in Western North Carolina. Our farm was located in the Blue Ridge Forest. Chinquapin pie is one of the best Christmas pies ever made. It was made with the same recipe as pecan pie. Most people never heard of a Chinquapin nut. They are rarely found anymore.