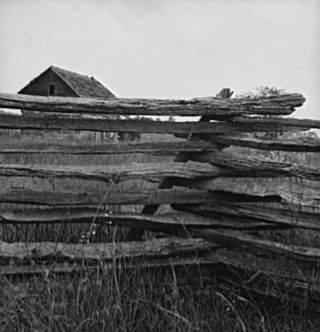 Free range for livestock was the common practice in North Carolina and the rest of the South from earliest settlement until the late nineteenth century. To keep livestock-defined as horses, mules, cattle, goats, sheep, and swine-from ruining crops, farmers customarily kept fences around their fields and garden patches. Free range was most beneficial to landless farmers and small landowners who might otherwise be denied access to waterways and woodlands. Soon after the Civil War ended, however, this system came under attack, since building and maintaining zig-zagging rail fences around crop fields stripped forests and consumed a great deal of farmers' time and energy.

Growth in commercial agriculture in the 1870s and 1880s caused large-scale farmers to seek ways to end this centuries-old practice. In 1873 residents of Alamance, Cabarrus, Mecklenburg, Orange, and Person Counties persuaded the General Assembly to enact the first stock law, or no-fence law, for their counties in the form of enabling legislation. The law, designed to eliminate crop fences and require livestock to be fenced instead, provided for local jurisdiction at either the county or township level. If the measure passed, a fence would be required around the boundary of the entire county or township, financed by a special tax levied on the inhabitants of the stock law territory. Gates were placed across public roads and were often cumbersome to those who traveled frequently in and out of livestock law territory. The responsibility for building and maintaining livestock law fences and gates was assigned to the respective county governments.

By 1880 similar enabling legislation had been passed for Hyde County and about 25 other counties in the Piedmont and western Coastal Plain. After several defeats at the polls, the law was amended so that owners of contiguous tracts could adopt the livestock law even when their neighbors in the same township voted against it. Municipal governments wasted no time in adopting livestock laws and putting up fences and gates around their boundaries. Children often took turns as unofficial town gatekeepers to ease the flow of traffic and make sure gates were not left open.

In 1901 the legislature passed a measure allowing county commissioners to declare as a lawful fence certain "natural obstructions," such as watercourses and mountain ranges, thereby reducing the burdensome costs of maintaining livestock law fences. A 1917 statute, upheld by the state supreme court in 1918, allowed the responsibility for maintaining fences to be shifted from citizens in stock law territory to those with free range. This law soon ended the practice of free range in most of the state. The livestock law was not adopted along the Outer Banks until 1958, when it became applicable to all livestock except marsh or "Banker" ponies on Ocracoke Island and Shackleford Banks.

If there is anybody doesn't

If there is anybody doesn't think that our resources have changed in the past 25 years I want them to see this picture. This fence compared to just a small vinyl fence is remarkable. I'm sure farmers back then had a lot of trouble keeping their livestock in with those fences. Hopefully everyone has taken the chance and gotten an upgrade. Right now I'm searching for a business that can supply me with a fence.