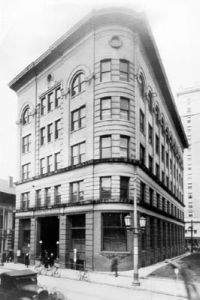 CCB's growth continued primarily through new acquisitions. In 1993 alone, CCB acquired the ten offices of Greensboro's First Home Federal, Graham Savings Bank, and Mutual Savings Bank and Citizens Savings, both in Lenoir. In 2000 Memphis-based National Commerce Bancorporation (with about 400 offices in nine states) acquired CCB Financial Corporation (with more than 200 offices), combining the institutions into a $15 billion enterprise. Memphis became the headquarters for the combined companies under the banner of National Commerce Bancorporation, and Durham remained CCB operations headquarters.