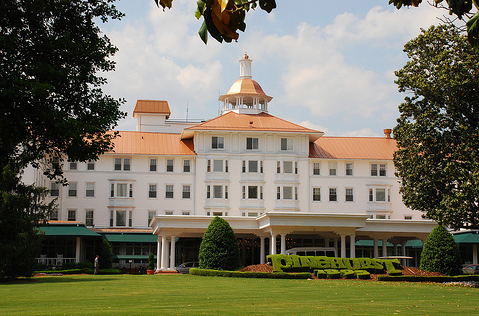 climate. After purchasing 5,890 acres for approximately $1.00 per acre in the Sandhills area of Moore County, Tufts hired Frederick Law Olmsted, the distinguished landscape artist who designed Central Park in New York City and the grounds of Biltmore House, to draw up plans for a village named Pinehurst. Tufts put in cottages, a power plant, a post office, a department store, and the 250-room Carolina Hotel. The huge structure, the largest frame hotel in the state, contained 49 suites with bath and a music room for 400 guests, which featured daily concerts by the hotel orchestra. The hotel opened on 1 Jan. 1901 and boasted every modern comfort and convenience, including electric lights, elevators, and telephones in each room. Tufts also built a trolley line from the Seaboard Railway station in nearby Southern Pines to transport passengers to the Carolina Hotel.

In 1980 Malcolm McLean of Diamondhead Corporation purchased Pinehurst, Inc. McLean built a new front entrance and thoroughly refurbished and repaired the hotel, now known as the Pinehurst Hotel. Diamondhead defaulted on bank loans in 1982, and the Club Corporation of America bought the hotel, golf courses, and clubhouse two years later. Restored to its former splendor, the Pinehurst Resort and Country Club was in the early 2000s a AAA Four-Diamond Resort, with eight golf courses, a tennis complex, and other amenities.

Lee Pace, "Getting Back on Course," Business North Carolina (August 1988).