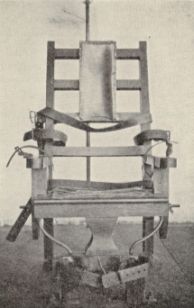 North Carolina's administration of the death penalty dates back to the colonial era, when capital punishment was regulated by English common law and legislation enacted by the colonial Assembly. Though arguably more humane than it was two centuries ago, when several slaves were executed by burning at the stake, the death penalty nevertheless remains controversial in North Carolina.

Hanging was the method of execution until 1910, when the state took over the task from the counties and began using the electric chair. In the eighteenth and nineteenth centuries, public hangings were social occasions that attracted spectators from far and near. In anticipation of the event, a wife might prepare a cake, fried chicken, and deviled eggs while her husband made sure he had plenty of liquor. They hitched the team to the wagon, and soon the whole family would be on their way to watch the gruesome event.

Electrocution, in contrast to hanging, was believed by many people to be painless. The method was certainly more efficient, and state and prison officials were satisfied with its performance until Republican legislator C. A. Peterson introduced a bill to replace it with the gas chamber. A popular lawmaker, Peterson persuaded the Democratic majority that the gas chamber, then used by three states, was both more efficient and more humane than the electric chair. Asphyxiation by lethal gas thus became the preferred means of administering the death penalty in 1936, although the electric chair remained in use as late as 1938.

Between 1910 and 1961 North Carolina executed 362 persons, two of them women. During this period capital punishment became more controversial, with death sentences increasingly challenged in the state and federal courts. In 1972 the U.S. Supreme Court declared the death penalty "cruel and unusual punishment" and a violation of the Eighth Amendment when juries were permitted to exercise complete discretion in imposing it, often resulting in arbitrary sentencing. The North Carolina Supreme Court responded by declaring that certain crimes would result in mandatory death sentences, taking responsibility out of the hands of the jury. In the 1976 decision in Woodson v. North Carolina, the U.S. Supreme Court struck down this practice on the grounds that it failed to give juries sufficient standards or discretion in determining whether convicted criminals should live or die. As a result of this and other related U.S. Supreme Court rulings, 120 inmates awaiting execution in North Carolina had their sentences vacated. Many received new trials, and most were resentenced to life in prison. 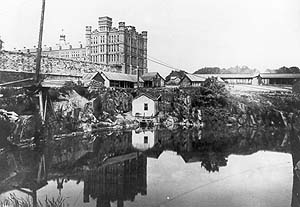 Although a revised capital punishment law, which became effective on 1 June 1977, restored the death penalty for first-degree murder, no executions were carried out in North Carolina from 1962 to 1984. But in the 1980s, national attitudes about capital punishment began to swing again toward harsh penalties for criminals, and beginning in 1984 the number of death sentences and executions in North Carolina began to rise. The General Assembly initially gave death row inmates the option to choose between death by lethal gas or lethal injection, but in 1998 legislation eliminated the former, leaving lethal injection as the state's sole method of execution. Between 1984 and 2004, 34 prisoners, including one woman, were executed. All death sentences have been carried out at Raleigh's Central Prison.

Opponents of capital punishment have continued to criticize the practice as cruel, and they have frequently suggested that socioeconomic and racial inequities distinguish those given the death penalty and others who receive nonlethal punishments for similar crimes. The late 1990s, in particular, saw a growing condemnation of capital punishment and new questions about its place in civilized society, with churches and organizations such as Carrboro-based People of Faith against the Death Penalty forcefully joining the debate. In 2004 the highly publicized acquittal of death row inmate Alan Gell, who was granted a retrial after an appeals court uncovered prosecutorial misconduct and overturned his 1998 conviction, lent weight to charges that the state's system of administering the death penalty was flawed and in need of review. Legislators, however, failed to enact a moratorium on executions. On 2 Dec. 2005 North Carolina carried out the nation's one-thousandth execution since reinstatement of the death penalty.

List of Persons Executed in North Carolina, from 1910-2006, from the North Carolina Department of Public Safety. https://www.ncdps.gov/Adult-Corrections/Prisons/Death-Penalty/List-of-pe...

Central Prison - circa 1900. Courtesy of  NC Division of Archives and History, call #: N_66_12_75. Copy courtesy of the Department of Public Safety Available from http://www.doc.state.nc.us/dop/prisons/central.htm (accessed October 5, 2012).