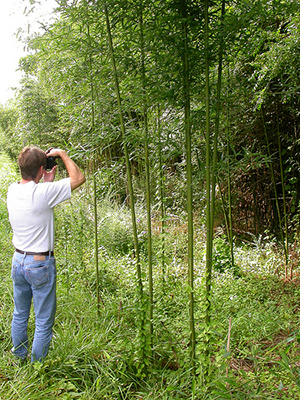 Canebrakes were large tracts of giant cane plants (Arundinaria gigantea), an evergreen relative of bamboo that once grew across great stretches of North Carolina and the Southeast, often along rivers and streams. A perennial plant that flowers and dies every few years, leaving seeds to grow in its place, the cane plant can reach a height of 20 feet. It often multiplies into thick patches with an extensive network of roots that can crowd out nearly all other forms of vegetation.

Cane was a valuable food for livestock, especially in the winter and early spring. Other uses for cane included chair bottoms, weavers' shuttles, tubing, cattle feed, and fishing poles. In A New Voyage to Carolina (1709), John Lawson records Indians using cane for "Mats, Baskets, and Dressing-boxes," canoe poles, and special mats used to wrap the dead for funerals. Canebrake ecosystems are highly vulnerable to fire, a method often used by settlers to clear them. Lawson witnessed Indians setting a canebrake on fire to drive game out into the open. The popping sounds coming from the burning cane were so loud that Lawson at first thought he was witnessing a battle between two parties of Indians armed with guns.

Canebrakes have largely disappeared from the South. They were easily cleared by settlers seeking farming and grazing land. The name appears in several land forms in North Carolina, however, including 14 separate Cane Creeks in the state.