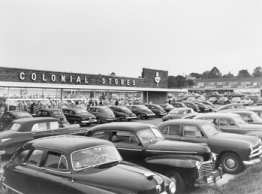 Cameron Village, the first shopping center built in the Southeast, opened in Raleigh in 1949. It was part of a 158-acre development that also included single-family residential areas and apartments, mostly constructed between 1948 and 1953 and reflecting postwar economic and demographic changes. By 1954 the shopping center included 40 stores, 38 offices, a movie theater, and parking for 1,500 cars on its 36 acres. Its success symbolized and profited from the rapid westward expansion of Raleigh following World War II. Unlike later shopping centers that brought "downtown" indoors, Cameron Village provided an improved "horizontal" downtown, with unique stores side by side, attractive facades and sidewalks, and convenient parking.

During the 1960s, Cameron Village featured numerous large fashion and clothing retailers, department stores, a supermarket, and dozens of specialty shops and offices. By the early 1970s, the shopping center had to adapt to competition from nearby malls such as North Hills and Crabtree Valley, which featured newer, larger, and often national chain stores and indoor, multilevel parking decks. Cameron Village has remained successful with a mixture of national and local tenants, undergoing a $17 million overhaul in the early 1990s.