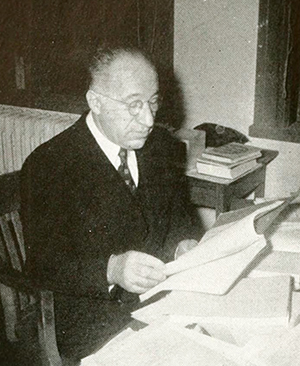 Erich Walter Zimmerman, economist and educator, was born in Mainz, Germany, the son of Wilhelm and Eugenie Grünberg Zimmerman. Educated in the Mainz Volkschule and a graduate of the "humanistic" Gymnasium at Düsseldorf, he pursued graduate studies in the universities of Berlin, Munich, and Bonn, from which he earned a Ph.D. degree in 1911. His doctoral dissertation on British coal exports resulted from extensive travels that had led him to Scotland, Wales, and England, where he learned English for a time in the universities of Edinburgh and Birmingham.

Immediately on completing his graduate studies, he went to the United States, originally as a visiting scholar to gather materials for a study of the Great Lakes in the transportation pattern of North America. To finance his studies, he taught first in a mountain school in Kentucky and from 1912 to 1915 in the Riverdale Country School in New York City. He began his teaching career as an instructor in economics and sociology at New York University (1914–18). In the fall of 1918 he was appointed professor of economics at James Millikin University, Decatur, Ill., where he remained until he joined the faculty of The University of North Carolina as associate professor of economics in 1921. He became a naturalized U.S. citizen in 1925.

Already an active scholar, Zimmerman had published two books, Foreign Trade and Shipping (1917) and Ocean Shipping (1921), which attracted favorable comment in the United States and abroad. His most important contribution, however, grew out of a course entitled "Resources and Industries," which developed into a book, World Resources and Industries (1933; 2d ed., revised and enlarged, 1951). In the biographical notes he furnished for The Kenan Professorships, he described his approach to the work as "functional or operational . . . [transferring] the concept of resources from its static natural science prototype of inventory fixtures to a dynamic product of interacting processes and forces . . . [stressing] availability for human use as against mere physical existence."

World Resources won for Zimmerman in 1934 the Mayflower Cup for the best nonfiction book by a North Carolina author as well as a Kenan professorship. It also brought him into prominence as a consultant on resources, and his services were much in demand. At various times he served in that capacity at the U.S. Bureau of Mines, Brookings Institute Puerto Rico Survey, Inter-departmental Committee on Puerto Rico, and U.S. Department of State. His comprehensive studies on resources, set forth in the government publications on the Puerto Rican economy, were influential in bringing order out of the chaos that was the aftermath of the Great Depression in the Commonwealth.

In 1942 Zimmerman left The University of North Carolina to accept a Distinguished Graduate Professorship of Resources at the University of Texas; in 1948 he was also made Distinguished Graduate Professor of Economics. Before his retirement in 1958 he had continued his studies in resources as a contributor to the Encyclopedia of the Social Sciences (1937), Resources of Texas (1944), Texas Academy of Science (1944), University of Texas Institute of Latin-American Studies (1946), Management Foundation (1950), and articles in various journals.

In 1949 Washington and Lee University honored him with an LL.D. degree. His citation well summed up Zimmerman's career as teacher and scholar: "Grateful students without number call you Master, and officials of State acknowledge your manifold patriotic contributions; but all men who struggle with the human problem know the importance of your accurate and sympathetic analysis of the potential of earth's varied people."

Zimmerman married Margaret Hoff on 23 June 1917. His three children were Erika Sophia, Charles Hoff, and Margaret Eugenia. He died and was buried in Austin, Tex.

He's not famous in the same

He's not famous in the same way musicians or athletes are, but if you look at the 4th paragraph, that should help explain.