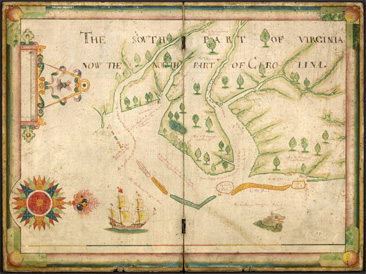 Francis Yeardley, explorer and Virginia official, was born in Virginia, the son of Governor Sir George and Temperance Flowerdew Yeardley. She was the cousin of John Pory, Virginia secretary and speaker of the 1619 Assembly. In 1643 young Captain Yeardley was appointed commander of troops in Accomack, and early the next year he received a grant of 3,000 acres for transporting fifty-eight people to the colony.

In 1647 he married Sarah Offley, who had been married first to Adam Thorogood, by whom she had a son, Adam, and second to John Gookin. There apparently were no children by her other two husbands. Yeardley was a member of the Maryland Council in 1652 but soon returned to Virginia and was a burgess of Lower Norfolk County in 1653. He was also a church commissioner for the county in 1651, 1652, and 1654 and a colonel of militia in 1653. He appears to have been a leader of the Cromwellian party in the colony.

Yeardley was interested in the land south of the settled portion of Virginia, and in a letter of 8 May 1654 to John Ferrars he reported that he had recently (apparently in September 1653) sponsored "an ample discovery of South Virginia or Carolana" which he described in glowing terms. He especially mentioned the fertile soil, mulberries, grapevines, timber, the longer growing season, and other natural features. He stated that he had invested £300 of his own money in the expedition and that he intended to go there himself in the summer of 1654. It appears that Nathaniel Batts, afterwards a pioneer settler of North Carolina, was among the explorers.

Information gathered at this time appeared on the map made in London in 1657 by Nicholas Comberford. The Roanoke Indians gave Yeardley a great deal of land, and he had a house built for the "Emperour of Roanoke." At the request of this Indian leader Yeardley received his only son in his home at Lynnhaven, Va., to be educated; he also was baptized there. Robert Bodnam, a carpenter, was sent by Yeardley in 1655 to build a house for Nathaniel Batts on what is now Salmon Creek, in Bertie County, where Batts established a trading post. The inventory of Yeardley's estate noted an impressive number of books "small & great."

Poorly researched. Sarah Offley had four surviving children with her first husband, Adam Thorowgood, a member of the Governor’s Council in Virginia. They were Anne, Sara, Elizabeth and Adam. At least two other children predeceased Adam as indicated in his will. She had a daughter, Mary, with her second husband, John Gookin. This has been well documented in standard research books for decades and in the court records of Lower Norfolk County, Virginia, which have been transcribed for decades. It has also been available from the research staff at the Thoroughgood House, a National Historic Landmark, in Virginia Beach (formerly Lynnhaven Parish in Lower Norfolk) since 1957 when it became the City’s first historic house museum. Furthermore, information on two of the Thorowgood’s daughters, Ann and Sara, is available from Historic St. Mary’s City, in Maryland as they married and moved to the Maryland Colony.

Looking for the will of

Looking for the will of Francis Yardley. His father, George's is on file, but can't find Francis's. Thank you for any info on this subject.
Kat

Thank you for posting your question! I am sending it to the reference librarians at the NC Government & Heritage Library, in case they have tips on more places to search for it. Their contact information may be found at http://statelibrary.ncdcr.gov/contact.html.