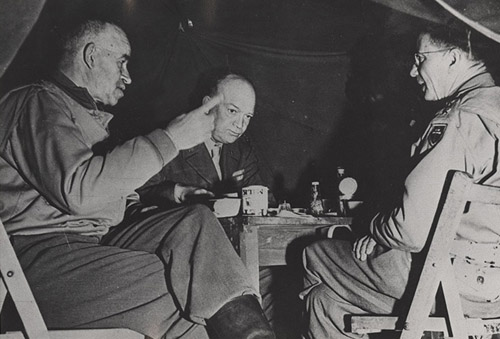 Ira Thomas Wyche, army officer, was born at Ocracoke, where his father was pastor of the Methodist church. The son of Lawrence Olin and Lorena Howard Wyche, he attended the Quakenbush School at Laurinburg, was graduated from the U.S. Military Academy on 13 June 1911, and was commissioned second lieutenant in the Thirtieth Infantry. He then served at several posts in California, Alaska, Texas, and elsewhere. During World War I Wyche was transferred to the Field Artillery and promoted to captain. In France he had temporary ranks as major and lieutenant colonel. After the war he was a regimental commander at Camp Jackson, S.C., and in 1919 he was assigned to duty in Washington, D.C. He was graduated from the Mounted Service School (1916), Field Artillery School (1924), Command and General Staff School (1925), and Army War College (1934).

When World War II began, Wyche was a brigadier general but in 1942 he was promoted to major general; he commanded the Seventy-ninth Division throughout its battle operation in the European theater. In 1945 he was named commanding general of the Eighth Corps in Germany. After the war he led the Third Corps at Camp Polk, La., and the First Service Command at Boston and in January 1947 was appointed inspector general of the army. After his retirement in 1948, he moved to Southern Pines, N.C. He died in Moore General Hospital following a stroke and was buried in the Fort Bragg Post Cemetery.

In 1917 he married Mary Louise Dunn, and they had a daughter, Elizabeth.

Wirt Robinson, ed., Biographical Register of the Officers and Graduates of the U.S. Military Academy, vol. 6-B (1920).

"General Wyche (right) lunches with Gens. Bradley and Eisenhower in Normandy, less than a month after the Allied invasion". 1944. Image courtesy of ECU Libraries. Availble from http://digital.lib.ecu.edu/5422 (accessed May 21, 2013).