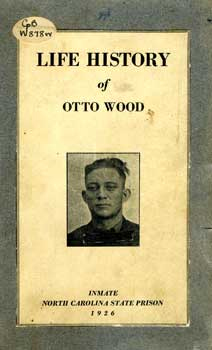 Otto Wood, criminal and escape artist, was born in Wilkes County of a law-abiding Baptist family. His father died when he was four years old; his mother's given name was Ellen. In his autobiography, published in 1926, he wrote that he was born in 1894 and had four brothers; other accounts state that he was born in 1895 and had two brothers and three sisters. Wood probably studied a total of three years in his life, although he claimed to have attended school for fewer than six months. His life of crime began at age seven when he ran away from home to live with an uncle in Vulcan, W.Va. There Wood witnessed battles between the Hatfields and McCoys and befriended several Hatfields.

At thirteen Wood began to work for the railroad, the only steady employment he ever had. Also during that year, he stole a bicycle in Wilkesboro for which he was jailed for five months and released with a reprimand. At fourteen he was convicted of breaking into a hardware store; sentenced to serve six months on the chain gang, he was, instead, sent home because of his youth.

During the six years he worked on the railroad, Wood lost his left hand in an accident. He used the $7,000 received in compensation to marry his fiancée, but a former girl friend charged him with seduction. At nineteen he began to serve his first prison sentence in the Virginia Penitentiary. Soon afterwards he made the first of ten prison escapes. He was recaptured in Portsmouth, Ohio, in 1916. After three months behind Virginia bars, Wood escaped again. He moved to Welch, W.Va., where he began to make and haul moonshine whiskey. His wife divorced him and he remarried. On a honeymoon trip to Kentucky Wood was convicted of car theft in Tennessee and sentenced to three years. His second wife divorced him and he never remarried. Nevertheless, he was the father of several children, both legitimate and illegitimate.

After six months in the Tennessee prison Wood made his third escape. In two weeks he was arrested in his native Wilkes County. A year later he escaped from the Tennessee Penitentiary a second time, leaving in a dry goods box being hauled from the prison yard. Chased by blood-hounds through the night, Wood knocked out a 250-pound guard and grabbed onto the caboose of a freight train. After disguising himself as a brakeman, he joined the chase for himself.

When Wood reached Welch, W.Va., he was arrested and given a five-year sentence for car theft. But five months later, on 3 Jan. 1919, he escaped. There were reward offers for his capture in Virginia, West Virginia, and Tennessee. The West Virginia governor pardoned Wood, and he was sent to Tennessee where he made his third escape from the prison.

On 15 Oct. 1923 Wood committed murder for the first time when he killed A. W. Kaplan, a Greensboro pawnbroker who refused to return a watch that Wood had pawned. For that deed Wood was sentenced to thirty years in the North Carolina state penitentiary. In May 1924, however, he escaped. Following two days of freedom he was caught in Virginia and returned. This time he remained in the prison for eighteen months before hiding in a concrete culvert being shipped out of the prison in a box car. Two weeks later, on 8 Dec. 1925, he was caught in Wilkes County.

The escape artist spent the next year in the state prison writing his memoirs, but despite his repentant words walked out on 22 Nov. 1926 through an unlocked door. This time he was gone for seven months until wounded in a burglary attempt in Indiana and returned to North Carolina. Placed in solitary confinement on death row, he remained for two years and two months. His health declined, and Governor O. Max Gardner ordered that Wood be treated as other prisoners. Wood then vowed not to run away while Gardner was governor, but he broke that promise on 12 July 1930, when he made his fourth escape from the North Carolina prison—and the tenth in a long list of such activity.

Wood died on the streets of Salisbury when the chief of police, R. L. Rankin, shot him in an exchange of gun fire. Wood's mother claimed his body, and he was buried in Coaldale, W.Va.