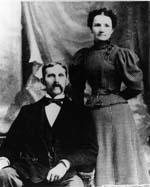 William Oliver Wolfe, stonecutter and father of Thomas Wolfe, was born at Latimore near York Springs in Adams County, Pa., the seventh child and third son of Eleanor Jane Heikes and Jacob Wolf [sic ], both of German stock. His siblings were Augusta Louisa (Martin), George Alexander, Sarah Ellen (Lentz), Huldah Emeline, Susan Rebecca, Wesley Emerson, Elmer Emerson, and Gilbert John. When only a boy, he was hired out to the more well-to-do farmers in the neighborhood. At the time of the Battle of Gettysburg, he observed the march of J. E. B. Stuart's invading Confederate cavalrymen and, according to family story, had a face-to-face encounter with General Fitzhugh Lee.

After the war Wolfe and his older brother Wesley went to Baltimore to learn stonecutting, a trade in which all five brothers were engaged at one time or another. Following brief stints in York, Pa., and Columbia, S.C., he went to Raleigh in 1870 to work on the state penitentiary, then set up his own monument works in the town. His marriage to Hattie J. Watson ended in divorce, and he then wed Cynthia C. Hill, with whom he moved to Asheville in 1880.

After Cynthia's death in 1884 of tuberculosis, he married Julia Elizabeth Westall. Wesley had meanwhile gone to Asheville and was engaged in various construction projects. For several years William Oliver was associated with James M. Westall, his brother-in-law, in the sale of sand, cement, plaster, lumber, and other building materials. In 1887 he and his wife purchased a lot at Market Street and Pack Square and on it erected a two-story building, a portion of which served as his stonecutting shop. He built a home (no longer standing) at 92 Woodfin Street, where Thomas Wolfe, the youngest of his eight children, all by his third wife, was born.

At the turn of the century he sold iron fencing and dealt in fruits and vegetables. His many ventures prospered. In both Raleigh and Asheville he was constantly involved in litigations, criminal as well as civil, most of the latter having to do with property disputes. In February 1906 he traveled to California with the notion of moving his business and family there, but when nothing came of it, his wife began operating a boardinghouse on Spruce Street. Wolfe and his daughter Mabel, and infrequently the older children, stayed on at Woodfin.

In November 1914 at Johns Hopkins Hospital he was operated on for cancer of the prostate, but in spite of many subsequent treatments there, his health slowly declined. From 1917 until his death he lived at Spruce Street. He was buried at Riverside Cemetery, Asheville.

Wolfe was a Presbyterian and a Republican. Though unlettered, he was a man of sharp business acumen, exuberant moods, sometimes violent actions, but always high spirits. His son's fictional portrait of him as W. O. Gant in Look Homeward, Angel and Of Time and the River is one of the glories of American fiction.