Thomas Clayton Wolfe, novelist and short story writer, was born in Asheville, the eighth child of William Oliver, a stonecutter from Pennsylvania, and Julia Elizabeth Westall Wolfe, a native North Carolinian. In 1904 he went with his mother and some of the other children to St. Louis, where his mother kept a boardinghouse during the World's Fair and where his brother Grover died, an event that he was to use with distinction in his fiction. In 1905 he began attending public school in Asheville and in 1912 moved to a private school operated by Mr. and Mrs. J. M. Roberts. Margaret Roberts was a major influence on his life and work. 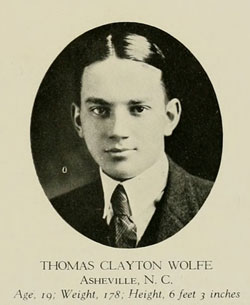 In June 1920 he was graduated from the university with a B.A. degree and in September entered the Graduate School for Arts and Sciences at Harvard University to earn an M.A. degree in English and to study playwriting under George Pierce Baker. Two versions of his play The Mountains were performed by the 47 Workshop at Harvard in 1921. In 1922 he completed the requirements for the M.A. degree, and in June of that year his father died in Asheville, another event of great importance in his fiction. Wolfe continued to study with Baker in the 47 Workshop, which in May 1923 produced his ten-scene play Welcome to Our City. In November 1923 he went to New York City, where he solicited funds for The University of North Carolina. In February 1924 he began teaching English as an instructor at the Washington Square College of New York University, a task that he continued to perform intermittently until January 1930. According to student reports, he was a conscientious and successful teacher.

In October 1924 he sailed for England on the first of what proved to be seven European trips. He traveled in France, Italy, and Switzerland, and on his return voyage in 1925, he met Mrs. Aline Bernstein, who was eighteen years his senior, a scene designer for the Theater Guild and the wife of a successful stockbroker. In October 1925 she became his mistress. Their affair was stormy, but Aline Bernstein was one of the powerful influences on his life. In the summer of 1926 he returned to Europe and there began work on the first version of his novel Look Homeward, Angel. In the summer of 1927 he made his third European journey, traveling in France, Austria, and Germany.

On 31 Mar. 1928 he completed the manuscript for the novel Look Homeward, Angel. That summer he made his fourth European trip, was injured in a fight at the Oktoberfest in Munich, and received news of Scribner's interest in Look Homeward, Angel, which was accepted for publication in January, beginning his long, close, and sometimes painful association with the editor Maxwell Perkins. The amount of editing done on the manuscript by Perkins has been greatly exaggerated. The novel, when published on 8 Oct. 1929, was of all Wolfe's long works the one closest to his original plan. It sold only moderately well, but it was a great critical success, and Wolfe was hailed as the most promising young American novelist.

In 1930 he received a Guggenheim Fellowship and made his fifth European tour. On his return in the late spring of 1931, he began living in Brooklyn. The following year his tempestuous affair with Mrs. Bernstein ended. Perkins, after first putting it into production, withdrew his second novel, K-19, which remained unpublished. His short novel, A Portrait of Bascom Hawke, appeared in Scribner's Magazine, and it was co-winner of the $5,000 Scribner's Short Novel Prize. In July he published a second short novel, Web of Earth, one of his best works. 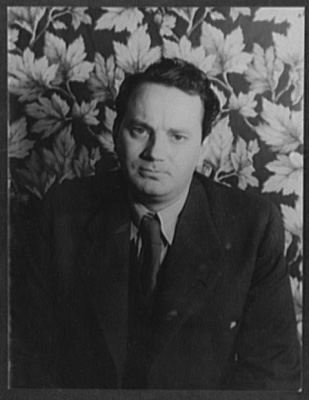 During the period between 1932 and 1935 Wolfe prepared three books for publication, K-19, No Door, a short novel, and a collection of three short novels. Perkins, however, insisted that Wolfe must come forward with a long work continuing his saga of Eugene Gant, the protagonist of Look Homeward, Angel. Wolfe was having difficulty with the large book although he was publishing excellent short stories and short novels. In 1933 Perkins began to work with him daily on the "big book" and finally, in July 1934, over Wolfe's protests, sent the manuscript of Of Time and the River to the publishers. On its publication Wolfe was bitter about the shape of the book, declaring that had he been allowed to, he would have made it much better. The critics, although generally approving, did find the work to be sprawling and ill organized.

In 1935 he participated in the Writer's Conference at Boulder, Colo., and his speech made there was published as a serial in the Saturday Review of Literature and as a book, The Story of a Novel. This work recounts his struggle to produce Of Time and the River. In November 1935 From Death to Morning, a collection of short novels and short stories, was published.

In 1935 and 1936 Wolfe made his sixth and seventh European trips, spending much time in Germany, where translations of his works had made him a very popular figure. In 1936, leaving Berlin on a train, an incident with a Jew trying to escape Germany forced him to recognize the cruel nature of the Nazi state, and on returning home he wrote one of his most powerful short novels, "I Have a Thing To Tell You," a strong indictment of Germany, which was serialized in the New Republic. Like many of his short novels, it was later incorporated in expanded form in one of his novels, in this case You Can't Go Home Again.

In 1936 his quarrel with his publisher, Charles Scribner's Sons, began; it grew out of his sense that Perkins was preventing him from writing what he truly wished to write, and it was exacerbated by what he felt was Scribner's unwillingness to defend him in a libel suit and by his unhappiness about the reputation that Of Time and the River and The Story of a Novel gave him of being a prodigious but formless writer whose works were shaped by his editor. This struggle with Scribner's continued throughout 1937, until in December he signed a contract with Edward C. Aswell, of Harper and Brothers, for the publication of his later work. However turbulent this period was emotionally, it was one of the most fruitful for Wolfe in terms of short publications in such journals as the New Republic, the New Yorker, Scribner's, American Mercury, Harpers Bazaar, the Yale Review, and the Saturday Evening Post.

In 1938 he left New York for a western tour, depositing the large body of manuscript materials that he had with his new editor, Edward C. Aswell. On the way west, he stopped by Purdue University and gave a lecture, "Writing and Living" (published in 1964). In July 1938 he became ill in Seattle, and on 6 September he was sent to the Johns Hopkins University Hospital, where he died of tuberculosis of the brain, eighteen days before his thirty-eighth birthday.

After Wolfe's death, Edward Aswell assembled from the manuscripts the novels The Web and the Rock and You Can't Go Home Again, which were published in 1939 and 1940. A collection of short stories and sketches and fragments of a novel were published as The Hills Beyond in 1941. In assembling these works, Aswell worked from Wolfe's outline and organized the material in the huge but incomplete collection of manuscripts that Wolfe had left. The Web and the Rock, which deals with a new protagonist George Webber, is pretty much the novel that Wolfe would have produced, although the latter two-thirds would certainly have been greatly revised. You Can't Go Home Again, also about Webber, is largely a collection of materials, with narrative links written by Aswell to bridge the gaps. Thus only in his short stories, short novels, and Look Homeward, Angel does Wolfe's work survive in a form in which he himself was the principal agent of organization. Of Time and the River carries too much of Maxwell Perkins's intention rather than Wolfe's, even to being in the third person when Wolfe had written most of it in the first person. The last two novels had to be given their present shape by Aswell with only Wolfe's outline to assist him.

In 1991 The University of North Carolina Press and Paul Gitlin, administrator of the estate of Thomas Wolfe, brought out The Good Child's River, an unfinished novel "based loosely on the early life of" Aline Bernstein, edited and with an introduction by Suzanne Stutman. According to the jacket, "Some sections of this work were heavily edited and published after Wolfe's death. Here for the first time is The Good Child's River, as Wolfe wrote it, along with some fragments, contained in two appendixes, that Wolfe may have intended to include in the finished work."

Thomas Wolfe was a writer of enormous energy and imaginative force, marked by a richly rhetorical style and powerful command of language. The subject of the bulk of his writing was his own experience as an American. He was in the tradition of Walt Whitman, attempting through the record of himself to explain and to define what it meant to be an American. His work is marred by excesses and exuberance, and of his novels, only Look Homeward, Angel has the firm shape that he himself gave it. Out of these facts has grown the legend that Wolfe was an uncontrolled and excessive writer, blessed with the gift of language but unable to control the structure of his works. But his thirty-two short stories and his seven short novels indicate quite clearly that this was not true. In the short length of the story and the intermediate length of the short novel, he was able to write tightly organized, powerful, and convincing stories, and it was only when he began to assemble these works into large structures, such as those that Perkins imposed on him in the early 1930s, that his lack of artistic control became apparent.

Wolfe's subject was always himself and his experiences, transmuted by the imagination and elevated by the power of his rhetoric. His effort to put a person, himself, fully "on record" through the guise of fiction was a major and masterful accomplishment in the American novel, and at the time of his death he was ranked among the top three or four twentieth-century American novelists. His critical stock has fallen severely since his death in 1938, yet his command of language, the strength of his characterizations, and the power with which he could describe the experiences and feelings of youth were all such that his place as a permanent figure in American writing seems assured.

C. Hugh Holman, The Loneliness at the Core: Studies in Thomas Wolfe (1975).

C. Hugh Holman and Sue Fields Ross, eds., The Letters of Thomas Wolfe to His Mother (1968).

Richard S. Kennedy, The Window of Memory: The Literary Career of Thomas Wolfe (1962).

Books and resources by Thomas Wolfe in libraries: https://www.worldcat.org/search?q=au%3Awolfe%2C+thomas