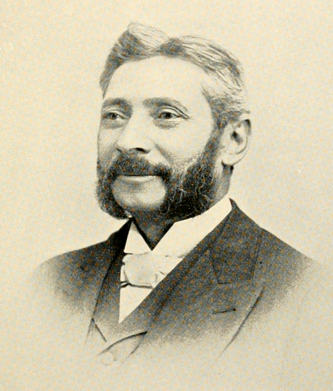 Samuel Wittkowsky, merchant and building and loan executive, was born in Schwersenk, near Posen, east Prussia (now Poznan, Poland), the youngest child of Jacob and Mendel Wittkowsky. Misfortune had befallen his formerly comfortable parents, and he spent his youth in poverty, receiving only the free school education available in the neighborhood. In 1853, with the aid of a distant relative, he immigrated to New York and obtained modest employment. As soon as he had saved enough money for the voyage, he settled in Charleston, S.C., and found satisfactory work.

In 1855 he moved to Charlotte, N.C., and became a clerk in a store named Rintels. Towards the end of the next year Wittkowsky invested his savings in a partnership with Rintels, and they opened a store at Ellendale in Alexander County with a branch in Caldwell County that Wittkowsky managed. Soon after the Ellendale store was moved to Boone, Wittkowsky sold his interests and moved to Winnsboro, S.C., briefly. When he returned to North Carolina, he became a partner in Koopman, Phelps, and Company in Concord. Withdrawing in 1861, he again joined Rintels and they opened a store in Statesville. At the beginning of the Civil War Rintels went to the North, and Wittkowsky began a business to manufacture hats, an undertaking that proved to be very profitable. With Rintels's return, the business came to be known as Wittkowsky and Rintels, and the partners opened a wholesale store and a retail store in Charlotte. Their business was good, new stores were opened, and after Rintel's death in 1876 a new partnership was formed with H. Baruch.

At the end of the Civil War Wittkowsky was living in Statesville, where Governor Zebulon B. Vance and his family were located temporarily in a rented house. On 3 May 1865 Vance was arrested by Federal cavalrymen. They had only pack horses to take the governor away, so Wittkowsky volunteered to drive Vance in his carriage to the depot in Salisbury, where he was placed on a train for Washington and imprisonment. At Vance's death in 1894 Wittkowsky delivered a memorial address in his honor.

A very generous man, Wittkowsky aided various public causes and engaged in private charities. He served as an alderman of Charlotte during the years 1878–79 and was an active member of the Chamber of Commerce. In 1883 he organized the Mechanics Perpetual Association with assets of one million dollars. This building and loan association enabled a large number of people in Charlotte to buy homes.

In 1871 Wittkowsky married Carrie Bauman of New York City, and they had three children: Dr. Albert Wittson, Gerard Wittson, and Mrs. J. B. Harty. An active Mason, he held high office in that fraternal organization in Statesville and Charlotte as well as at the state level. His funeral was conducted by an Episcopal priest, and he was buried in Elmwood Cemetery, Charlotte.

"Samuel Wittkowsky, Esq." Photograph. A memorial volume of the Guilford Battle Ground Company. Organized May 6, 1887, at Greensboro, N.C. It contains a brief history of the battle of Guilford Court House, an account of the organization and progress of the Guildford Battle Ground Company, biographical sketches, and a full account of the Holt monument and its dedication, July the 4th, 1893. Greensboro, N.C., Reece & Elam, printers. 1893. https://archive.org/stream/memorialvolumeof00guil#page/38/mode/2up (accessed March 19, 2013).

Do you have a photo of the

Do you have a photo of the first Mrs. Zebulon B. Vance, wife of our Civil War governor that the Vance house in Statesville could enlarge and use?

Hello and thanks for visiting

Hello and thanks for visiting NCpedia once again!

That's a very good question regarding an image of Harriet Espy Vance, the first Mrs. Vance.  Surprisingly, an image is proving difficult to find.  An image may be on display at the Vance Birthplace State Historic Site.  I have contacted them to inquire about the existence of such an image.

I have also replied to this comment via email to the email address you included in your comment. I’ll keep you posted and let you know when I have a reply!

Your permission, please, to

Your permission, please, to use the photograph of Samuel Wittkowsky to accompany an article by me in the Statesville (NC) Record & Landmark for this Sunday, April 26, about the arrest of NC Gov. Vance and his carriage ride to Salisbury from Statesville in 1865, described by Mr. Wittkowsky. A prompt reply would be much appreciated. Thank you. O. C. Stonestreet (704) 883-2129

Thank you for visiting this NCpedia entry.  The image of Wittkowsky was published in 1893 in A Memorial Volume of the Guilford Battle Ground Company and is now in the public domain -- so no permission is needed to republish the image.