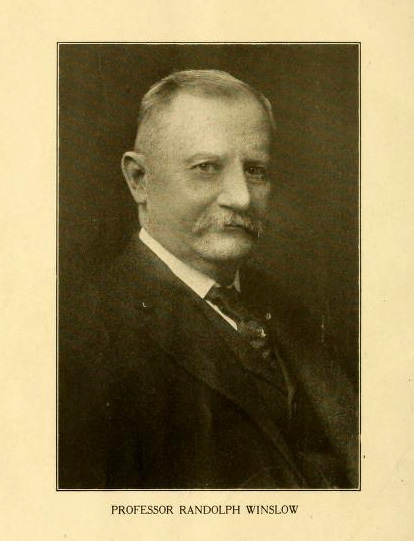 Randolph Winslow, surgeon and educator, was born in Hertford, Perquimans County, to Dr. Caleb and Jane Paxson Parry Winslow. He attended Rugby Academy in Baltimore and in 1871 was graduated from Haverford College, from which he also received the customary master's degree in 1874. After obtaining an M.D. degree from the University of Maryland in 1873, he undertook additional study and training at the University of Pennsylvania and abroad in Berlin, Vienna, and Paris.

Winslow became a member of the teaching staff of the University of Maryland Medical School as assistant demonstrator of anatomy and rose through various positions to become chairman of surgery in 1902. He was one of the founders of the Woman's Medical College, Baltimore, where he also was professor of surgery (1882–93) and dean (1890–92). Additionally, in 1884 he held the chair of operative surgery and topographic anatomy at the Baltimore Polyclinic. He was on the surgical staff of a number of hospitals as well as a school for boys and an orphanage in Baltimore. A pioneer in performing several new operations in Maryland, he was among the first, if not actually the first, to introduce antiseptic surgery in Maryland.

Winslow was an active member of national, regional, and state medical societies, in which he held offices and contributed numerous important papers to their journals. He was a member of the North Carolina Society in Baltimore of which he once was an officer. In 1913 he was a founder of the American College of Surgeons and became a Fellow.

His role at the University of Maryland was an important one—it was largely through his efforts that the university hospital was built, and under his leadership the medical course was increased from two to three years and then to four. He was a regent of the university from 1891 to 1920 and on the board of trustees of the endowment funds of the university. He also served for twenty years on the executive council of the Association of American Medical Colleges.

University of Maryland, Bulletin of the School of Medicine, vol. 21 (April 1937 [portrait]).

Haverford College. Alumni Association. Biographical catalogue of the matriculates of Haverford College : together with lists of the members of the college faculty and the managers, officers and recipients of honorary degrees, 1833-1922. Philadelphia : Printed for the Alumni association, 1922. 1922. https://archive.org/stream/biographicalcata22have#page/152/mode/2up/search/winslow (accessed January 7, 2014).