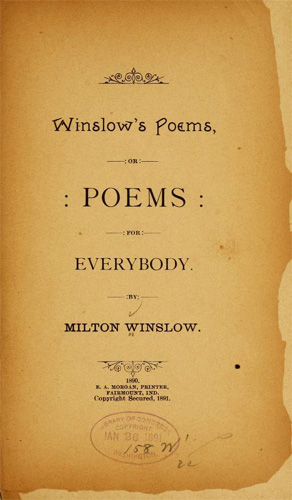 Milton Winslow, Quaker minister and author, was born in Randolph County, the oldest child of Thomas and Anna (Nancy) Nixon Winslow, members of the Back Creek Quaker Monthly Meeting. His mother died after April 1827, and his father married Martha Bogue on 7 July 1830. In 1836 the family was granted a certificate of removal of membership to Mississinawa Monthly Meeting in Grant County, Ind., where Milton farmed and was ordained into the Society of Friends. In Indiana he married Mary Roberts on 23 Apr. 1846. Winslow indicated that he proposed to her in 1843 by sending her a poem that he composed proclaiming his love. They had ten children. As a Quaker minister Winslow traveled widely and even returned to North Carolina briefly in 1851.

Soon after the Civil War Winslow, his wife, and six other Quakers went to Mississippi as teachers of freedmen. They were well received by the former slaves but "very contemptuously" by white people. One night after the Winslows had retired, they were awakened by a soft knock at the door. On opening it Milton was greeted by one of his elderly black pupils who asked permission to stand guard during the night. They had seen signs, the man related, that the Winslows were to be harmed that night.

Over the years Winslow wrote numerous poems, most of them on folksy subjects and with local settings. In 1890 a 204-page edition was published in Fairmont, Ind., entitled Winslow's Poems; or, Poems for Everybody. A second edition, expanded to 287 pages with a pen-and-ink sketch of the author as a frontispiece, was issued by the same publisher in 1893.

His poems are devoid of literary merit but reflect the thoughts and sentiments of an ordinary citizen. One 72-line poem, however, is of interest to historians. "Mountain Meadow Massacre" is a dramatic and somewhat embellished recounting of an attack in September 1857 on a party of California-bound immigrants from Arkansas and Missouri by a mixed band of Mormons and Indians beyond Salt Lake City. Some 120 people were slaughtered, roughly one-fourth of all the California-bound immigrants who lost their lives in this manner. Winslow indicated that Mormon leaders refused to sell supplies to the tired and hungry people. Instead, after starting on their way, the immigrants were attacked, and all of them except seventeen young people were slaughtered; horses and wagons worth $300,000, jewelry, and clothes were taken. This is the only known attack on such immigrants by a collaborating band of whites and Indians, and Winslow's account in verse contains information not otherwise available. His sources are not noted, however, and it is difficult to separate fact from poetic license.

Barbara N. Grigg and Myrle L. Walker, Friends at Back Creek: Into the Third Century (1993).

Willard Heiss, comp., Abstracts of Records of the Society of Friends in Indiana, part 3 (1970).