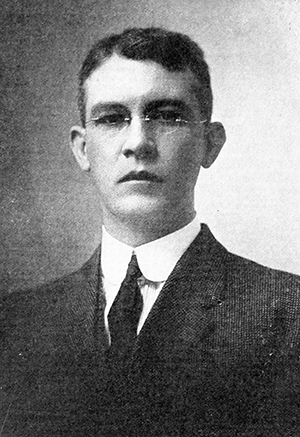 Thomas James Wilson, Jr., professor and university administrator, was born in Hillsborough, the son of Dr. Thomas James and Margaret Douglas Ross Wilson. In 1894 he was graduated from The University of North Carolina, which granted him an M.A. degree in 1896 and a Ph.D. in 1898. The next year he taught a ninth-grade class in the Charlotte public schools, reportedly the first man in the state with a Ph.D. degree to teach in a North Carolina graded school.

Returning to Chapel Hill in 1899 to teach Latin and Greek in the university, he was named associate professor in 1902. After additional graduate work at the University of Chicago in 1903 and 1906, he was appointed registrar in 1908 but continued to teach until 1915. Wilson became dean of admissions in 1930 and secretary of the faculty in 1934. Under his leadership the admissions officers of many colleges in North Carolina took steps leading to the designation of regularly accredited schools by the State Department of Public Instruction. High school units for college entrance were also standardized.

Wilson was editor of the University Record series and archivist in charge of maintaining historical records. He was noted among students for his supervision of several student organizations, notably Phi Beta Kappa, and for his remarkable memory for names.

He married Lorena Frank Pickard, and they had four sons: Thomas J. III, Peter P., Marvin P., and Walter W. Wilson was a member of the Episcopal church and was buried in the Chapel Hill cemetery.