Dr. James Edwards Williamson was a physician and well-known politician in Caswell County, North Carolina. Born August 13, 1799 in Caswell County, Dr. Williamson was a graduate of the University of Pennsylvania in 1825 where he completed his medical studies and published an essay on Calomel, and its usage for treating yellow fever. He was an active physician and surgeon, serving as a charter member and two-time president of the Medical Society of the State of North Carolina in 1852 and 1853, and he was actively involved in the political community of Caswell County.

Dr. Williamson was a doctor during a time when medicine was much less advanced, technology was limited, and the doctors of his time relied on the help and teachings of each other in order to advance their knowledge and practices in the field of medicine. Dr. Williamson was a student of James Webb, a surgeon and the first vice president of the Medical Society of North Carolina. Dr. Webb practiced medicine in Orange County, North Carolina. Dr. Edmund Strudwick was also a student of Dr. Webb’s and a graduate of the University of Pennsylvania one year before Dr. Williamson. When the Medical Society of North Carolina was resurrected in 1849, Drs. Williamson, Strudwick, and Webb were all charter members, sharing a vision of advancing medicine in the state as well as the country. This vision included the importance of having a Board of Medical Examiners to test physician’s knowledge prior to practicing medicine and surgery, maintaining few but well-established medical colleges, internship and post-graduate study in medicine, the use of cadavers for autopsies to aid medical learning, and the importance of organized medicine through state divisional meetings to spread medical knowledge through publication. Today, all of these things are still of great importance.

Dr. James Williamson resided with his family in the Locust Hill community in Caswell County on his family farm, Waverly Plantation. Dr. Williamson married Minerva B. Williams on September 22, 1830. Together, they had eight children before her death on December 22, 1847. Two years later, Dr. Williamson married Helen M. Jeffreys, with whom he had no children. The Williamson children were all born in between 1835 and 1845. Records from the Williamson family include a very detailed diary of daily activities on the Waverly Plantation. In 1854, Dr. Williamson’s farm contained 49 enslaved people, who were valued at $28,150. These people, enslaved by Williamson, were organized by family, indicating that Dr. Williamson allowed the families to reside together. There were six enslaved families total, but also one house of three enslaved men who were single, and one eighteen year old enslaved house servant named Catherine. The people Williamson enslaved were categorized into occupation, and according to the farm records there were four house servants, two blacksmiths, three spinners and weavers, one miller, three nurses, a wagoner, a cook, and the rest were listed as farmers. The Waverly Plantation was a very busy farm during most times of the year, and in 1854 alone the the enslaved laborers on the plantation produced 14,422 pounds of tobacco, killed 40 hogs, and produced 125 bags of grain sold in Richmond for $626.50. 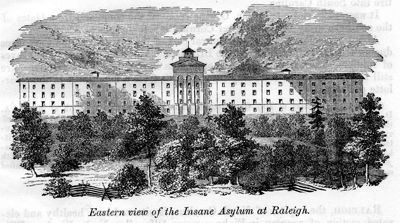 In March of 1859, Williamson was appointed by Governor John W. Ellis as the director of the North Carolina Insane Asylum in Raleigh, which later became the Dorothea Dix Hospital. Two years later on May 4, 1861, the justices of Caswell County called for an election to select delegates for a state convention. Dr. Williamson ran in the election, losing by a narrow margin to Bedford Brown and Captain John A. Graves; the votes from his own precinct were not counted because they were turned in late. Captain John A. Graves resigned later that year to accept a commission in the army, and an election was held, choosing Dr. Williamson as his replacement.

Dr. James Williamson was a very hard working man, balancing his wife and eight children, his practice of medicine and surgery for 40 years, his work with the Medical Society of the State of North Carolina and as director of N.C. Insane Asylum, his successful Waverly Plantation farm operation, and his political involvements in the Caswell County community. The advancements and ideas put forth by Dr. Williamson and his colleagues greatly influenced the medical community and organization in North Carolina, especially in the area of medical education. The ideas of his teacher, Dr. James Webb, and his colleague, Dr. Edmund Strudwick, were blended with his own and led to many current practices in the medical field today. Dr. James Edwards Williamson died in 1867 in Caswell County. He was 68 years old.