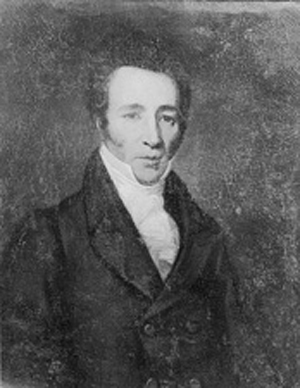 Thomas Hill Williams, lawyer, planter, and U.S. senator from Mississippi, grew up just east of the Pee Dee River in the part of Anson County, N.C., that in 1779, when he was six, became Richmond County. Where and how he received his good academic education and sound legal training, except through close association with his civic-minded father, is unknown. Reticent almost to a fault, Tom had a perceptive intellect, a willingness to work, and seemingly independent resources. Only a year after he became of age the 1795 tax list of Richmond County showed that he owned 681 acres, perhaps a fortunate inheritance. Tagged later as a Jeffersonian Republican lacking partisan rancor, he may have been the Thomas H. Williams who in both 1796 and 1797 was elected clerk of the Tennessee House of Representatives. In any case, the flurry of U.S. preparations that accompanied the rise of the cold war with France in the John Adams administration must have accounted for Williams going to assist Caleb Swan, the New Englander who was paymaster general in the U.S. war office. One Thomas H. Williams, conceivably the same man, served honorably as a first lieutenant in the Twelfth U.S. Infantry for the brief period from 1 Apr. to 15 June 1800. The right Williams performed so well for the paymaster general that Swan warmly recommended him for future employment.

The Carolinian may have visited Mississippi territory in 1802 to file credentials towards getting a license to practice law there. In the autumn of 1803, endorsed by Meriwether Lewis, Williams was picked up at Louisville, Ky., by a river craft on which Thomas Rodney of Delaware was floating down to Natchez to begin a career as a territorial judge. Rodney and Williams arrived at Natchez the day before Wm. C. C. Claiborne, the territorial governor, took off for New Orleans to receive formal possession of Louisiana. On 16 Jan. 1804 Williams was in New Orleans acting as Claiborne's private secretary.

After Judge Rodney and Surveyor General Isaac Briggs praised Williams in letters to Secretary of the Treasury Albert Gallatin, Secretary of State James Madison sent down a commission on 3 Mar. 1805 naming Thomas H. Williams to the position of land register west of Pearl River. Pleased with the register's qualifications and popularity, the new territorial governor, Robert Williams, as well as Briggs wrote to President Thomas Jefferson in May 1805 quietly hoping that the register west of Pearl could be additionally appointed Mississippi's territorial secretary, an end effected by recess appointment on 1 July 1805. None too happy about the doubling up of his engagements, register Williams did discharge the office of secretary of Mississippi territory on an acting basis through 2 June 1806.

Later that year, after Spanish forces intruded to the east side of the Sabine River, General James Wilkinson of the U.S. Army refused to attempt their dislodgement until reinforced by the Mississippi militia. Under Major Ferdinand L. Claiborne, Thomas H. Williams took to the field as captain, adjutant, and quartermaster to the Mississippi contingent. Displeased with Cowles Meade as territorial secretary, the Mississippi governor in the spring of 1807 let President Jefferson know that he wanted a man like "Mr. Williams, the late secretary." The hint resulted in another recess appointment of Williams, confirmed on 12 Nov. 1807. Meanwhile, after qualifying as secretary and with the governor's blessing, Williams left for Richmond, Va., expecting to attend the trial of Aaron Burr as a witness and then visit the president to report on conditions in Mississippi.

As far as known the territorial official made no venture into matrimony until quite late in life. In early 1809 he was contemplating getting extended leave to attend to some kind of private business in Kentucky, but the abrupt departure of Governor Robert Williams from Mississippi at the end of the Jefferson administration froze Secretary Williams in as acting governor of the territory from 4 Mar. to 30 June 1809. Territorial delegate George Poindexter pulled strings in Washington to keep the acting governor from the full governorship, which next went to David Holmes.

Wm. C. C. Claiborne, now governor of Orleans territory, was instrumental in getting Thomas H. Williams nominated on 3 Jan. 1810 (confirmed the next day) as U.S. collector of customs at New Orleans, but Williams continued to be paid as the Mississippi secretary until 25 May. In the new post he exerted valiant efforts to stamp out smuggling and to control erratic foreign shipping. He exchanged frequent correspondence with his superior, Secretary Gallatin, and in October 1812 conferred personally with him in seeking relief from a role that did not end until a new collector appeared on 9 Aug. 1813. Over the next three years he probably based most of his activities in Mississippi. In 1816 he served as secretary to a commission that concluded a treaty with the Choctaw Indians. Late that year, on behalf of John McKee, the U.S. agent to the Choctaws, he circulated through the nation compiling a list of worthy individual claims.

The Mississippi legislature that assembled on 6 Oct. 1817 chose Walter Leake of Red Bluff and Williams from Washington, the former territorial capital near Natchez, as the state's first U.S. senators. They took their seats in the national capital on 11 Dec. 1817, shortly after the Fifteenth Congress convened. Williams was reelected in 1823 for another full term and served through six Congresses (1817–29), most of the time as Mississippi's senior senator. He was appointed to the naval affairs committee in five of the six Congresses and to the public lands committee in three of them. The climax of his senatorial career came in the first session of the Sixteenth Congress when he was chosen both chairman of the standing committee on public lands and chairman of the select committee for the admission of Alabama. In the latter role he operated so promptly that Maine's petition for statehood was additionally thrown to his three-man select committee's care. It happened to be he, the former North Carolinian, who reported, on 22 Dec. 1819, a bill declaring the consent of Congress to Maine's admission, but not actually effective until 15 Mar. 1820 because of jockeying for the Missouri Compromise.

Williams did not seek reelection, nor did he welcome any other type of public employment. An opportunity offered through George Graham, commissioner of the general land office, was declined on the ground that he did not financially need the job and "the confinement which would be required would not accord with my plan." He wrote this on 3 Sept. 1829 from Robertson County, Tenn., a healthful farming area from which he picked his wife and where he developed his permanent plantation home. A longtime friend of Andrew Jackson, he did become on 17 Sept. 1832 one of the commissioners who hoped to carry out the terms of the Rives convention with France. Even after settling in Tennessee he made visits to Mississippi, maintaining financial and property interests there.

Williams drew his will of 20 Nov. 1848 and codicil of 16 Mar. 1850 in his own hand but without witnesses. He left his books that were in Mississippi to his nephew Robert H. Wall, whom he had probably helped get established as a planter near Holly Springs. The house and lot he owned at Rodney, Miss., he willed to the widow and children of his deceased half brother Edward. There were legacies to other relations, but the bulk of his Tennessee property and assets, including chattels and cash, went to his wife, his sole executrix. He stipulated, however, that at her death the Williams farmstead near Tyrees Springs would go in fee simple to his grandnephew Tom Williams Turner of Simpson County, Ky. (fifth of the nine children of John and Betty Ann Blewett Turner). He further charged the executrix with obtaining a plain but durable vault in Nashville in which their ashes might rest together. In directing that the dates of his birth and death be inscribed, he categorically stated, "I was born on the 14th of January 1773."

He died in Nashville, obituaries said from dropsy. The Reverend Charles Tomes conducted the funeral services at Christ Episcopal Church, Nashville. Williams was buried with Masonic honors. His widow, Mary Cheatham Williams, born on 25 Sept. 1801, survived until 13 Apr. 1874, after which her remains too were consigned to the Williams vault at the old City Cemetery in Tennessee's capital.

NCpedia staff note that the Biographical Directory of the United States Congress indicates that Thomas Hill Williams was born in 1780 and died in 1840.

George Edgar Blewett, William Blewett Who Settled in North Carolina in 1746: A History and Genealogy of Him and His Descendants (1954).

Goodspeed Publishing Co., History of Tennessee from the Earliest Time to the Present: Together with an Historical and Biographical Sketch of the County of Knox and the City of Knoxville (1887).

Francis B. Heitman, Historical Register and Dictionary of the United States Army, vol. 1 (1903).