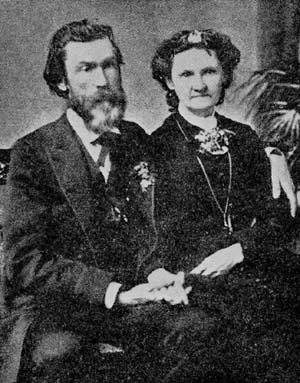 Sarah Johnson Cogswell Whittlesey, writer, was born in Williamston, the oldest child of Luman and Elizabeth G. Peale Whittlesey. Her younger brother was Oscar Columbus. She had two half brothers, Edgar Augustus and Joseph Adolphus, by her father's first marriage to Sarah Johnson Cogswell, who died in 1821 and for whom his next child was named. Luman Whittlesey was a native of Washington, Conn., a descendant of New England forebears going back to 1635, and an 1816 graduate of Yale. His second wife was a North Carolinian. He moved to Williamston to teach at the new Williamston Academy in 1818. In 1830 he had a farm and a store in Palmyra but moved back to the academy in 1841. After an unfortunate business venture with his son-in-law, he taught in Edenton in 1846 and finally settled in Alexandria, Va., in 1848.

During these peregrinations Whittlesey was sooner or later joined by his daughter Sarah. Educated at home until she was fourteen, she attended a school in Hamilton for two years and was graduated from La Vallee Female Seminary in Halifax County in 1841. On 19 June 1842 she married Henry A. Smith, of Lenox, Mass., recently arrived in Williamston to conduct an evening writing school. Apparently she agreed to this unfortunate union to please her beloved father and brother. Four years later she abandoned Smith because of his "jealous tyranny," assisted in her escape by her friend D. William Bagley, who arranged to bring her and her trunk down a ladder from her locked room on the second floor of the house, and who transported her to a Roanoke River vessel making an instant departure. In 1850 she and her husband were divorced, and she resumed her maiden name.

Though her first literary effort had appeared in the Edenton Sentinel in the summer of 1846, it was not until she was comfortably at home with her parents and brother in Alexandria that her exceptionally honed talents for genteel "false-feminine" sentimentality got into full stride. The Spirit of the Age (Raleigh), the Williamston Mercury , and even the Southern Literary Messenger carried her poems. The Times of Greensboro serialized her short novels "The Hidden Heart," "Reginald's Revenge; or, The Rod and Reproof," and "The Broken Vow," and the Southern Field and Fireside (Raleigh) announced "The Unwedded Wife; or, Wrong and Remorse." The title of Heart-Drops from Memory's Urn (1852) indicates the nature of the poems therein. Seven moral tales in which pure-minded heroines are pursuing or being pursued appear in The Stranger's Stratagem; or, the Double Deceit, and Other Stories (1859). Virginia is the scene of her novel Herbert Hamilton; or, The Bas Bleu (1868). Yet Bertha the Beauty: A Story of the Southern Revolution (1872) is Miss Whittlesey's "glory," for this lengthy autobiographical novel, with scenes in Williamston and Palmyra, has a detailed narrative of the struggles of the long-suffering heroine with her wicked husband. To the poems in Spring Buds and Summer Blossoms (1889) she added some verses by her brother Oscar Columbus titled Idle Hours .