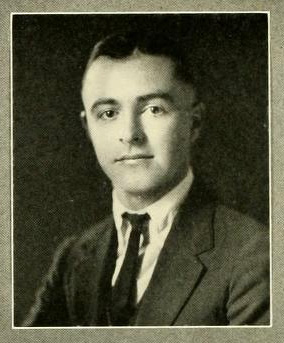 Daniel Jay Whitener, historian and college administrator, was born near Newton, the son of Daniel Wilfong, a farmer and schoolteacher, and Alice Amanda Kincaid Whitener. After attending local schools, he served in the U.S. Army during World War I, then entered Catawba College, located at that time in Newton. He transferred to The University of North Carolina, from which he received a bachelor's degree in 1922 and a master's degree in 1923; his thesis was titled "The Rise of the Standing Committee System in Congress."

Whitener began his career in education as a high school principal in Catawba County in 1923. In 1928–29 he was acting head of social sciences at Lenoir-Rhyne College in Hickory. Determined to apply his talents to higher education, he returned to The University of North Carolina and earned a Ph.D. degree, awarded in 1932. That fall he accepted appointment as professor of history and government and chairman of the social studies department at Appalachian State Teachers College; he was the school's first faculty member to hold a doctorate. In the next twenty-three years Whitener probably influenced more history teachers than any other person in North Carolina, for nearly all future teachers majoring in social studies were exposed to his popular classes. From 1955 until his death he was dean of the college.

Although Whitener devoted most of his energies to his classes and other college and community activities, he was the author of important books and articles on history and education. His revised Ph.D. dissertation appeared in 1945 as Prohibition in North Carolina, 1715–1945 in the James Sprunt Studies in History and Political Science. In 1949 the same series published his article, "Public Education in North Carolina during Reconstruction, 1865–1876." He also wrote a centennial souvenir booklet called History of Watauga County, North Carolina, 1849–1949, and History of Appalachian State Teachers College, 1899–1949 (1949); the booklet, Local History: How to Find and Write It (1955); and a grade school textbook, North Carolina History (1958). The North Carolina Historical Review, South Atlantic Quarterly, and other journals carried his articles on education, temperance, Prohibition, and the dispensary movement.

State and local history was Whitener's passion, for he believed that all good history depended on a solid local foundation. His political and professional affiliations attested to that interest: He served on the Watauga County Board of Education and was an officer of the Historical Society of North Carolina, North Carolina Literary and Historical Association, and Western North Carolina Historical Association. At the annual banquet of "Lit and Hist" in 1958, he delivered his presidential address, "Education for the People," in the presence of former President Harry S Truman, who also was a speaker. A founder and first executive director of the Southern Appalachian Historical Association, Whitener was instrumental in the inauguration of the outdoor drama, Horn in the West, on whose board of directors he served. Under appointment by Governor Luther H. Hodges, he was a member of the executive board of the North Carolina Department of Archives and History from 1959 until his death. In that capacity he drafted and shepherded through the General Assembly a bill encouraging improved teaching of state and local history in the public schools. No ivory-tower historian, Whitener also busied himself in community and civic clubs and in the activities of the Boone Methodist Church.

On 23 Sept. 1925 he married Annie Laurie Choate of Sparta. They had one son, Carr Choate (Jack), a career officer in the U.S. Air Force. Whitener died of a heart attack and was buried in Mount Lawn Cemetery, Boone. In 1975 the building formerly housing Appalachian Elementary School was renovated and renamed D. J. Whitener Hall for offices and classrooms of the college's departments of history, political science, and sociology.