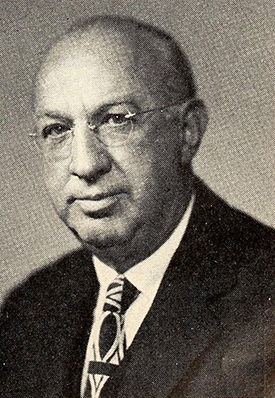 John Clarke Whitaker, businessman and community leader, was born in Salem, the son of William A. and Anna Bitting Whitaker. His father served as a major in the Confederate army and later operated a small tobacco company that gave John his start in the tobacco business. Young Whitaker attended Guilford College for two years, then transferred to The University of North Carolina from which he was graduated in 1912. The next year he joined the Reynolds Tobacco Company as a factory hand; he was a machine operator on the Camel production equipment when the first ones rolled off in 1913. Whitaker moved up rapidly from foreman to superintendent before he volunteered for service in the navy in World War I. Entering as a seaman, he advanced to ensign before his discharge.

After the war he returned to find Reynolds in need of a personnel department and was offered the position of organizing it. He stayed in personnel for twenty-nine years, making it and Reynolds's medical program among the best in American industry. In 1935 Whitaker was elected a director, and in 1937 he became vice-president of manufacturing and personnel, a post he held until 1948, when he became president of the company. He was elected chairman of the board in 1951 and chairman of the executive committee in 1955. In 1958 the company named its gigantic new manufacturing plant Whitaker Park in his honor. Whitaker retired on 1 Jan. 1960 but remained a consultant for many years. His portrait, commissioned after his retirement, hangs in the lobby of Whitaker Park.

Also engaged in numerous community activities, Whitaker served as alderman of Winston-Salem from 1921 to 1925. He helped raise money, supported bond issues, and made financial decisions for the construction of Forsyth Memorial Hospital, whose convalescent care unit was named Whitaker Care for him. He served as chairman of the Housing Authority, Community Chest, YMCA, Winston-Salem Teachers College Board of Trustees, North Carolina Engineering Foundation, United Community campaign, and Winston-Salem Hotel Company and as director of the executive committee of the Wachovia Bank and Trust Company and of the Security Life and Trust Company.

Whitaker married Elizabeth Norman of Mooresville, and they were the parents of John C., William, Louisa Johnson, and Elizabeth.

A vestryman of St. Paul's Episcopal Church, Whitaker belonged to the Rotary Club, the Masonic lodge, and the Democratic party. He died in Winston-Salem and was buried in Salem Cemetery.