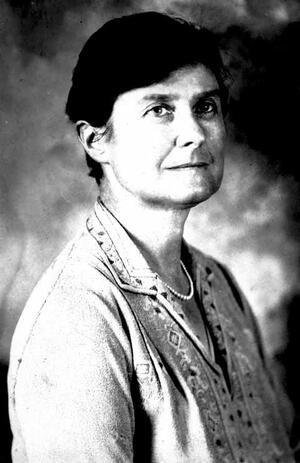 Gertrude Weil, social reformer, humanitarian, and philanthropist, was born in Goldsboro, the older daughter of Henry and Mina Rosenthal Weil. Beginning in 1865 the Weil family and Weil department store became eastern North Carolina institutions. Herman Weil, Gertrude's uncle and a Confederate war veteran, chose Goldsboro as a promising site for a general store and there founded H. Weil & Bros. with the help of his brothers, Henry and Solomon. Gertrude attended Goldsboro public schools and Horace Mann High School in New York City. She was graduated from Smith College in 1901, the first Smith student from North Carolina.

A Sunday school and adult Bible study group teacher for over fifty years, she was a charter member and three-time president of the North Carolina Association for Jewish Women. As district officer for both Sisterhood and Hadassah for the eastern states, she vigorously promoted interfaith activities. In the late 1950s she turned her efforts towards civil rights, building a park and swimming pool for African Americans, holding integrated meetings in her home, and founding the Bi-Racial Council in 1963. When the cast-iron black groom hitching posts adorning many Goldsboro lawns became a focus of racial tension, Gertrude Weil, with typical incisive wit, defused the situation by publicly painting her statue white.

The Weil family—Gertrude, her brothers Herman and Leslie, her sister Janet Weil Bluethenthal, and her cousin Lionel—established the Weil Lectures on American Citizenship at The University of North Carolina, gave the Weil and Rosenthal buildings at Woman's College in Greensboro, and endowed there the first scholarships for foreign students. In Goldsboro and Wayne County, the family donated Herman Park and made possible the Wayne County Memorial Community Building, the Public Library in the former Lionel Weil home, Boy Scout and Girl Scout camps, and the Wayne Memorial Hospital.

In 1951 Gertrude Weil was named Outstanding Woman of the Year by Chi Omega sorority. The citation for the honorary degree in doctor of humane letters bestowed by Woman's College in 1952 began, "Daughter of North Carolina and leader among North Carolina's daughters." Dr. Frank Porter Graham, president emeritus of The University of North Carolina, presided at the testimonial dinner for Miss Weil held at the B'nai B'rith Lodge of Greensboro in 1956. The biographical sketch accompanying the award of the Smith College Medal in 1964 stated: "It would be a great deal more difficult to find, in the State of North Carolina, a cultural, charitable, educational organization or drive with which the name of Miss Gertrude Weil in not connected, than to attempt to summarize her contributions to the civic welfare of this State." In 1965 she received the Howard Odum Award from the North Carolina Council on Human Relations.

Straight-backed, straightforward, but never straitlaced, diminutive Gertrude Weil continued her active and knowledgeable participation in such diverse additional interests as gardening, theater productions, and historical restoration until her death in Goldsboro at age ninety-one. Burial was in the Hebrew section of Willow Dale Cemetery, Goldsboro.

Resources related to Gertrude Weil in libraries [via WorldCat].