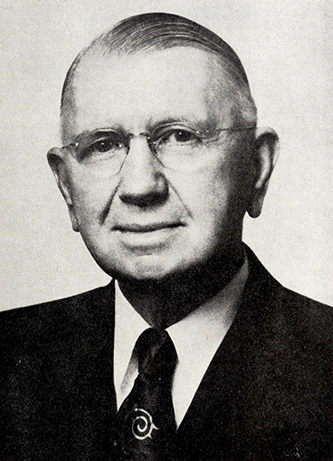 Walter Herbert Weatherspoon, attorney, utility executive, and philanthropist, was born at Nelson to William Hardy and Cynthia Hopson Weatherspoon. The operator of a general merchandise store, his father despaired of sending his five sons and two daughters through college; thus the family's limited financial resources went primarily to the education of Jesse Burton Weatherspoon, who became a minister and professor of homiletics at Southern Baptist Theological Seminary in Louisville, Ky.

Contrary to common practice at that time, the father freed Herbert from the obligation of pooling his own earnings with the family's, and the young man joined brother Jesse as he left for Wake Forest College. To pay his own expenses Herbert Weatherspoon sold students clothing for Cross and Linehan of Raleigh, operated a club for sixty students, represented a steam laundry, and worked for T. E. Holding's local bank. He organized and sang bass in the school glee club and worked as business manager of The Student magazine. His total earnings exceeded expenses. He was graduated from Wake Forest in 1907 with a bachelor's degree and a law license, which he had received during his junior year by passing the bar exam (administered then by the chief justice of the North Carolina Supreme Court). Forty-six years after his graduation, Wake Forest University honored him with the degree of doctor of laws.

Weatherspoon practiced law in Laurinburg from 1907 to 1928 with Stephen McIntyre and R. C. Lawrence as partners and the McNair interests as one client. Politically active, he campaigned for Prohibition and represented Scotland County in the state legislature for two regular terms and one special term. In the General Assembly he introduced a bill that led to the creation of Caswell Training School at Kinston. He also wrote and managed passage of the so-called Weatherspoon law, designed to enforce Prohibition, which had won by a 40,000 vote margin in a popular referendum. Josephus Daniels, the lifelong "dry" editor, hailed the law with an editorial captioned "Blind Tigers Must Go!"

In 1928 Weatherspoon moved to Raleigh as a partner with Josiah William Bailey (later a U.S. senator) in the law firm of Bailey and Weatherspoon. One client was the Carolina Power and Light Company, which soon elected him as full-time counsel to succeed the late James H. Pou, Sr. During an association spanning forty-two years, he rose progressively to vice-president and general counsel, director, and executive vice-president of CP&L. The utility honored him in 1958 by naming its facility at Lumberton the W. H. Weatherspoon Steam Electric Generating Plant.

An active churchman, he taught Bible, sang bass, and served as a deacon and board chairman of the First Baptist Church of Raleigh. For four decades he was a trustee (and sometimes board president) of Meredith College, for which he launched a five-million-dollar advancement program. Its first large gift was a physical education-recreation complex donated by Herbert Weatherspoon and the family of his brother, the late James R. Weatherspoon, who had been treasurer of Durham Life Insurance Company. His gentle wit once broke a critical stalemate as churchmen debated the issue of dancing on Baptist college campuses. Weatherspoon was quoted as remarking in the heat of debate: "If you deny dancing on campus, students will leave the campus to dance; and that's where the rub comes." Resulting laughter broke the tension and led to a peaceful solution.

Herbert Weatherspoon served several corporate and community causes. He was president of the North Carolina Citizens Association, Raleigh Chamber of Commerce, and Lions Club. He won many formal citations for his keen intellect, oratorical eloquence, and uncompromising standards of personal and professional conduct; his wise judgment was sought on critical issues for decades by Louis V. Sutton, longtime president and chief executive of Carolina Power and Light, who called him "the conscience of the company." His hobbies included golf, fishing, hunting, horseback riding, and flower gardening. He invariably wore a tiny boutonniere, usually a sweetheart rose from the gardens at his home in Hayes Barton, Raleigh. When he stopped riding on a doctor's advice, he donated his mount to the already outstanding stable of saddle horses at Meredith College.

With characteristic modesty, he attributed his successes to kin, friends, professors, and business associates. He said that he owed his life to a classmate, John Lee of Durham. On the way to school they had to walk a log across a swollen, swirling creek. Nine-year-old Herbert lost his footing, fell in, and was swept helplessly downstream. The older Lee plunged in, grabbed the large collar of his shirtwaist, and towed Herbert ashore.

His first wife was Maude Lee of Laurinburg, the daughter of Robert E. and Matilda Jane Sutton Lee. Two years after her death in 1960, he gave the First Baptist Church of Laurinburg an organ containing 1,683 speaking pipes and twenty chimes in memory of her contribution to the church's music and work with children. His second wife was the former Mrs. William Benjamin (Margaret Calvert) Duncan, of Raleigh, who survived him. Weatherspoon died at Atlantic Beach and was buried at Montlawn Memorial Park, Raleigh. He left no children.