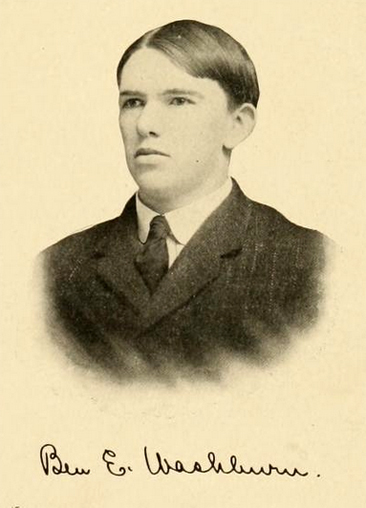 Benjamin Earl Washburn, physician and public health officer, was born in Rutherfordton, the son of John Rutherford and Camila Miller Washburn. He was graduated from The University of North Carolina in 1906 and received a master's degree in 1909; in his thesis, entitled "The Uncle Remus Stories," he made a careful study of the language ascribed by the author Joel Chandler Harris to blacks.

Awarded the M.D. degree from the University of Virginia in 1911, he began practicing medicine in the South Mountains of Rutherford County, but after fourteen months he became field director in North Carolina for the Rockefeller Sanitation Commission (1913–14) in campaigns against hookworm disease. He next became health officer of Nash County, one of the first counties in the United States to provide full-time health service. As a member of the staff of the Rockefeller Foundation, he organized the Bureau of County Health Work in the North Carolina State Board of Health in 1919–20. With time out in 1930, he attended the London School of Tropical Medicine and Hygiene, from which he received a certificate in tropical diseases.

Between 1920 and 1940 Washburn was director in foreign service with the Rockefeller Foundation in the West Indies, Central America, and Colombia, Venezuela, and British Guiana in South America. Here he was involved with plans to eradicate hookworm, malaria, tuberculosis, and yaws. Returning home during World War II, he became district health officer with the North Carolina State Board of Health and on the Rutherford County Selective Service Board. Afterwards for several years he held a seat on the District Selective Service Appeal Board.

Washburn was a member of the Governor's Commission on Hospitals and Medical Care (1944), director of the North Carolina Good Health Association (1946), and secretary of the board of trustees of the Rutherford Hospital. For a time he served as health editor of the Progressive Farmer magazine. Among other publications, he was the author of Jamaica Health Stories and Plays, The Health Game, A County Doctor in the South Mountains, As I Recall, and Rutherford County and Its Hospital.

In 1912 Washburn married Zillah Howe, and they had a daughter, Zellah Howe (Mrs. John Pike).