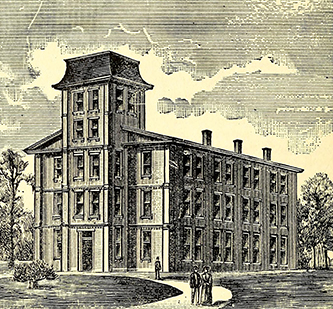 Henry Walser, politician and college founder, was born in northern Davidson County near the Yadkin River, the youngest son and pen-ultimate of nine children of Frederick and Margaret Earnest Walser, six of whom migrated to Tennessee and the Midwest. In 1825 Henry married Elizabeth Warner, and the couple had eight children: Margaret (Phillips), Priscilla (Owen), Daniel E., Cynthia (Smith), Gaither, Lucy Norfleet (Oakes), Henry Clay, and Frederick Taylor. He became a prosperous farmer with large holdings and in the 1830s aligned himself with the Union element of the Whig party, promoting such internal improvements as navigable streams, railroads, and mail routes.

Walser served in the North Carolina House of Commons for six terms: 1842, 1846, 1848, 1854, 1858, and 1862. His enthusiasm for education led in 1855 to the founding of Yadkin Institute (later Yadkin College) on land he donated. He was its principal builder, financial supporter, and president of the board of trustees until his death. As a Methodist Protestant institution, it was the immediate predecessor of High Point College. In 1860, with the oldline Whigs in disarray, he joined the short-lived Constitutional Union party and attended the Baltimore convention to nominate the Bell-Everett ticket. Though a strong Unionist, he actively supported the Confederate troops during the Civil War, and two of his sons, Gaither as a private and Henry Clay as a major, served in the army.

The race issue was never a divisive one in Davidson County, and after the war, his wealth depleted but his Union loyalties intact, he became a Republican. He was a local magistrate and, for six months before his death, first mayor of the town of Yadkin College. He was buried near the college building. A watercolor of Henry Walser was in the possession of his great-granddaughter, Mayree Oakes Greene.