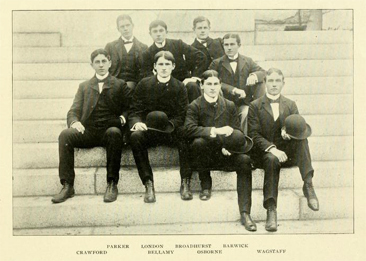 Henry McGilbert Wagstaff, historian and university professor, was born on a farm near Roxboro, the son of Clement McGilbert and Sarah Elizabeth Paylor Wagstaff. During his boyhood he developed a sound understanding of agricultural techniques and processes and a deep affection for field, forest, and stream, but in his late teens he became interested in the history of his state and favored an academic career, which his parents encouraged. In 1895 he entered The University of North Carolina, where he was elected to Phi Beta Kappa and awarded a Ph.B. degree in 1899. For the next two years, while he taught at Rutherford College, his interest in history grew steadily. He entered the Johns Hopkins University for graduate work in history in 1901 and received the Ph.D. degree in 1906.

After teaching history and economics at Allegheny College, Meadville, Pa., for a year, Wagstaff was invited to join the faculty of The University of North Carolina as associate professor of history. He was delighted with this opportunity not only because it enabled him to teach at his alma mater, but also because it put him fairly close to the farmlands that he had roamed and plowed as a boy and to which he remained deeply attached. In the summer of 1907 he married and settled in Chapel Hill, where he spent the remaining thirty-eight years of his life as professor of history.

Since the history department was relatively new and the staff small, Wagstaff had to teach in several areas, including ancient, medieval, and Latin American history, until additional staff made it possible for him to devote all of his time to the history and government of Great Britain. Indeed, this diverse teaching experience helped him acquire a basic command of nearly all fields of history, an asset that was an inspiration to his students and a never-ending surprise to his colleagues. And even though he gained a remarkable mastery of English history as a whole, most of his writing and editing concerned the history of North Carolina. In addition to articles dealing with the history of the state, Wagstaff published States Rights and Political Parties in North Carolina, 1776–1861 (1906) and Federalism in North Carolina (1910). Later he edited several collections of letters and documents: The Harrington Letters (1914), The Harris Letters (1916), The Papers of John Steele, 2 vols. (1924), The James A. Graham Papers, 1861–1884 (1928), Minutes of the North Carolina Manumission Society, 1816–1834 (1934), and the Letters of Thomas Jackson Strayhorn (1936). He also published a little volume of short stories dealing with the community of his childhood: The Concord Community: A Retrospect (1941), and he left unfinished an analytical account of The University of North Carolina from 1876 to 1940, later published under the title Impressions of Men and Movements at the University of North Carolina (1950).

As well as a sound scholar and gifted teacher, Wagstaff was a versatile, judicious, and public-spirited citizen with a wide variety of interests. He was an officer for many years in the Orange County Building and Loan Association, the owner and overseer of farmlands in Person County, and president (1928–29) of the North Carolina Literary and Historical Association. In the last year of his life he won first prize in a short story contest conducted by the Charlotte Writers Club. Kind, sturdy, and compassionate, his deep love of field and forest, and of all that lived therein, was lifelong. On 28 June 1907 he married Mary Jefferson Stephens, and they were the parents of Mary Frances, wife of Captain A. B. Coxe USN (Retired) of Chapel Hill, and Henry McGilbert, Jr., who was killed in action off Leyte on 29 Oct. 1944. Wagstaff was a Methodist and a Democrat. He died in Watts Hospital, Durham, and was buried in the Old Chapel Hill Cemetery.